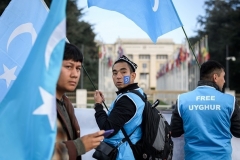 Uyghurs demonstrate outside the U.N. Human Rights Council in Geneva against Chinese policies in Xinjiang. (Photo by Fabrice Coffrini/AFP/Getty Images)

(CNSNews.com) – The U.N. “experts” investigating racism and minority issues whom Secretary of State Antony Blinken has invited to visit the United States have never visited China, despite years of recorded abuses against minorities, including Uyghur Muslims and Tibetan Buddhists.

The experts invited by Blinken are appointed by and report to the Human Rights Council, a body long mired in controversy over the presence within its ranks and behavior of some of the world’s leading rights-abusing regimes – including China.

He also said that the U.S. “intends to issue a formal, standing invitation to all U.N. experts who report and advise on thematic human rights issues.”

The HRC has appointed dozens of such individuals, with mandates ranging from “the rights of migrants” and “the right to food” to “adequate housing as a component of the right to an adequate standard of living, and on the right to non-discrimination in this context.”

Blinken’s announcement was praised by the American Civil Liberties Union and Council on American-Islamic Relations (CAIR), while some Republican lawmakers slammed the move.

“[I]nstead of asking the #UN to come here & tell us how ‘racist’ America is, why don’t you ask them to go to #Cuba where an evil socialist regime storms into peoples homes, beats the crap out of them & then drags them away?” Sen. Marco Rubio (R-Fla.) asked in a tweet addressed to the secretary of state.

ACLU human rights program director Jamil Dakwar welcomed Blinken’s announcement, saying it and other groups have long been pressing for a standing invitation to the U.N. experts.

Dakwar also welcomed the HRC’s adoption this week of a resolution establishing a new “independent expert mechanism” to examine racism.

“It’s time to double our efforts to reckon with legacy of slavery and Jim Crow and take bold action to repair the damage and reimagine public safety by shifting resources from policing institutions and reinvesting in social and economic services in communities that have been harmed by systemic racism and increasingly militarized policing,” he said.

(Blinken earlier also welcomed the adoption of the HRC resolution and said he “look[ed] forward to engaging with the new mechanism to advance racial justice and equity.”)

CAIR, which describes itself as the nation’s biggest Muslim civil rights and advocacy group, commended the administration “for taking this important step by opening our nation’s borders to experts working to combat racism and racial discrimination.”

“The injustices suffered by members of minority communities in this country and around the world must be recognized and adequately addressed,” said the group’s government affairs director, Robert McCaw.

Neither of the “special rapporteurs” currently holding the “racism” and “minority issues” mandates has visited the U.S. before, but two previous holders of the “racism” mandate have done so, in 2008 and 1994.

After his visit in the summer of 2008, then-special rapporteur Doudou Diene of Senegal reported to the HRC that in his meetings with state institutions, civil society organizations, minority communities and “victims of racism” he had found “decisive progress” in the legal and political fight against racism.

However, he also found that “the historical, cultural and human depth of racism still permeates all dimensions of life of American society,” and recommended that Congress establish a bipartisan commission to evaluate progress and failures in the fight against racism.

‘Take a guess how many times they’ve been to China’

Since the mandate was established in 1993 – by the HRC’s predecessor, the U.N. Commission on Human Rights – the special rapporteur on racism has paid a total of 47 country visits, 28 of them to liberal democracies.

The special rapporteur on minority issues has carried out 24 country visits since that mandate was established in 2005, nine of them to liberal democracies.

Neither of the mandate-holders has visited China, where the treatment of Uyghur and other minority Muslims since at least 2017 has outraged rights advocates around the world, and according to the U.S. government constitutes genocide and crimes against humanity.

China’s policies in Tibet, which it has occupied since 1950, entail repression and abuses going back decades, including efforts to “sinicize” (stamp with Chinese influence) Tibetan Buddhism.

Responding to Blinken’s announcement, Rep. Mike Gallagher (R-Wisc.) noted, “The U.N.’s special rapporteur on contemporary forms of racism has already conducted two official ‘fact finding’ visits to the US, along with many to liberal democracies like Australia, the UK, and Canada.”

“Take a guess how many times they've been to China?”

Meanwhile Sen. Tom Cotton (R-Ark.) recalled a visit to the U.S. by another of the HRC-appointed experts, the “special rapporteur on extreme poverty and human rights.”

“The last time that the United States invited a U.N. special rapporteur into our country they produced a left wing screed of Democrat talking points attacking our nation,” he said, in reference to Philip Alston’s visit in 2017.

“The report accuses Americans of demonizing the poor and asserts that ‘racism is a constant dimension’ of American life. It attacks states’ rights and tax cuts, condemns voter ID, and calls for an end to cash bail,” Cotton said.

“U.S. tax payers shouldn’t have to pay for a liberal U.N. bureaucrat to malign our country. The Congress should deduct the cost of this investigation and any future investigations from the next U.N. funding bill.”

After Alston, an Australian international law scholar, issued the report on his visit, then-Ambassador to the U.N. Nikki Haley called it “patently ridiculous’ for the U.N. to examine poverty in the U.S.

Haley wrote that Alston had “wasted the U.N.’s time and resources, deflecting attention from the world’s worst human rights abusers and focusing instead on the wealthiest and freest country in the world.”

UN Expert Tells Lawmakers US ‘Not Exempt’ From Int’l Obligations to Make Reparations For Slavery (Feb. 18, 2021)