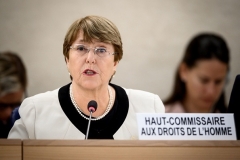 (CNSNews.com) – Countries that profited from slavery and colonialism must acknowledge “the truth about these legacies” and make reparations, the United Nations’ top human rights official said Monday.

“Behind today’s systemic racism and racial violence lies the absence of formal acknowledgement of the responsibilities of states and others that engaged in or profited from enslavement, the transatlantic trade in enslaved Africans, and colonialism – as well as those who continue to profit from this legacy,” she said.

“Communities, families, and individuals were deprived of lives, livelihoods, resources, and rights and this still continues.”

Bachelet called on the relevant countries to “create, reinforce and fully fund comprehensive processes – with full participation of affected communities – to share the truth about what was done, and the harms it continues to inflict.”

“Establishing the truth about these legacies, and their impact today, and taking steps to address these harms through a wide range of reparations measures is crucial to healing our societies and providing justice for terrible crimes.”

Bachelet said countries should “draw upon the great body of international obligations and commitments, and to demonstrate much stronger political will, to accelerate action for racial justice and equality.”

Bachelet, a socialist former president of Chile, presented the council with a report on “systemic racism” in law enforcement targeting Africans and those of African descent.

The report was mandated by a resolution adopted by the HRC weeks after the death of George Floyd in Minnesota in May 2020. The resolution referred to Floyd by name, five times.

Having worked on the report for almost a year, Bachelet told the council that research “could not find a single example of a state that has comprehensively reckoned with its past or accounted for its impacts on the lives of people of African descent today.”

During a dialogue with HRC member-states and observers after Bachelet’s address, U.S. representative Benjamin Moeling thanked her “for this insightful and forthright report which underscores that systemic racism demands a systemic response and calls for an agenda that promotes accountability and redress for victims.”

Moeling, charge d’affaires at the U.S. Mission in Geneva, said the U.S. government was addressing the challenges, citing among other things President Biden’s executive order on “advancing racial equity and support for underserved communities.”

“With humility and introspection, we also say that racial inequality is a challenge faced by every state, including the United States, but together we can overcome it. We all can, and must, do more.”

“And we look forward to working with the international community to promote respect for human rights for all and encourage this council to continue to address this critical issue,” Moeling concluded.

Current members of the HRC include several autocratic regimes that are accused of violating the human rights of minorities within their own borders.

They include Sudan and Mauritania, Islamic countries with a record of modern-day slavery of black Africans, and China, accused by Western governments, legislatures and rights advocates of atrocities including genocide against minority Muslims in Xinjiang.

Chinese Ambassador Chen Xu, delivering a statement on behalf of a group of countries which he did not name, said, “We are gravely concerned that minorities, in particular Africans and people of African descent, Asians and people of Asian descent, have long been suffering from systematic racism, racial discrimination and hate crimes.”

“We are particularly concerned that during the COVID-19 pandemic, some political and public figures made racist remarks, inciting violence, racial discrimination, xenophobia and Islamophobia,” Chen said, adding that such remarks had led to a surge of discrimination and hate crimes against Africans and Asians.

UN Expert Tells Lawmakers US ‘Not Exempt’ From Int’l Obligations to Make Reparations For Slavery (Feb. 18, 2021)

Biden on Supporting Reparations: Depends on Details – and Whether it Includes Native Americans (Jun. 11, 2020)