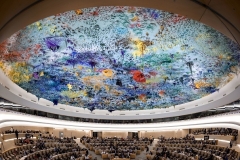 (CNSNews.com) – With a delegation of Cuba’s communist regime in its ranks, the U.N. Human Rights Council was silent on Monday about the rare anti-government protests that erupted on the island a day earlier.

Neither the protests, nor the government’s heavy-handed response – with scores of dissidents and demonstrators arrested – featured during the second to the last day of the HRC’s three-times-a year, three-week-long session.

The day’s agenda did provide Cuban permanent representative Juan Antonio Quintanilla with the opportunity to present for a vote a resolution on “human rights and international solidarity.”

Over that period, despite having a human rights record frequently criticized by advocacy groups, Cuba has not been the subject of a single critical HRC resolution.

“Cuba’s brutal regime should be expelled immediately from the UN Human Rights Council,” he tweeted, recalling that Libya had been suspended in 2011 after Muammar Gaddafi “similarly declared war on his people.”

(No other HRC member has been suspended or expelled, although its ranks have included rights-abusing governments like China, Russia, Saudi Arabia, Sudan, Pakistan, Egypt, Mauritania, Qatar, Algeria and Venezuela’s Maduro regime.)

Neuer also noted that not one of the 55 experts, special rapporteurs and working groups mandated by the HRC to examine various rights-related issues (know collectively as “special procedures”) has issued a statement in reaction to the Cuba situation.

Since the beginning of July alone, statements have been issued by “special procedures” dealing with Israel (twice), Honduras, Burma, Iran, the Palestinian Authority, Belarus, Guatemala (twice), UAE and Morocco.

U.N. Watch Executive Director Hillel Neuer noted that not one of the UN'’s 55 rights experts has issued a statement in reaction to the Cuba situation. (Image: Twitter)

Solidarity versus ‘selfishness and nationalism’

Cuba’s activist role at the HRC has prioritized so-called “third generation” rights such as “international solidarity,” “the right to development” and “the right to peace.”

(The position is an unpaid one, but the council budgets around $450,000 a year to cover the expert’s travel, documentation, translation, and support staff.)

Cuba’s focus on “third generation” rights stands in contrast to attempts by democracies at the council to highlight violations of fundamental rights and freedoms – such as freedom of expression, assembly, religion, and the press – by governments around the world.

Western critics view “third generation” rights as ill-defined concepts in the human rights field which merely divert attention and resources away from issues they believe the council should focus on.

The “international solidarity” resolution introduced by Quintanilla on Monday was co-sponsored by like-minded countries – including Belarus, Bolivia, Egypt, Yemen and the Maduro regime in Venezuela.

In the context of the COVID-19 pandemic, Quintanilla told the HRC, “it has been proven that international solidarity is strategically crucial.”

“An international order wherein solidarity would be above selfishness and nationalism is a more and more pressing need for the world,” he said, adding that the resolution also emphasizes the importance of “cooperation, unity, collective action [and] inclusive responses.”

Quintanilla expressed the hope the council would give the resolution a strong endorsement, “as a sign that the international community is recognizing solidarity as a key component of how nations act together.”

The 47-member HRC passed the resolution by 32-14, with the “no” votes all coming from European and Asian democracies.

Explaining the European Union’s decision not to support the measure, Austrian Ambassador Elisabeth Tichy-Fisslberger said while the E.U. is providing billions of euros and millions of coronavirus vaccines to partner countries, its views on the Cuban-drafted initiative remain unchanged.

“The scope of this resolution is foreign to the Human Rights Council mandate and should be addressed in other fora,” she said. “There is no recognition nor legal ground for the so-called right to international solidarity.”