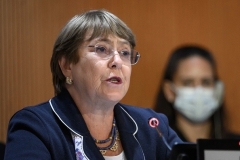 (CNSNews.com) – Uyghurs and others have been calling on the U.N.’s human rights chief to release a report on the situation in Xinjiang before she visits China next month, but her office said Thursday the report must go to the Chinese government for its input.

“As with other reports by the office, China, as the member state concerned, will be provided with the report in due time for the government to express its views or submit further information,” said Liz Throssell, spokesperson for the Office of the High Commissioner for Human Rights (OHCHR).

The move brought a sharp response from the head of a leading Uyghur advocacy group in the U.S., who saw it as serving no purpose beyond delaying further the report’s release.

“This is the equivalent of a murderer being handed the evidence of their crime,” Campaign for Uyghurs (CFU) executive director Rushan Abbas said on Thursday night.

“Based on the OHCHR’s recent history with the Chinese regime, I strongly feel they will compel [high commissioner Michelle] Bachelet’s office to manipulate the report.”

“And the question begs, why not make the findings public?” Abbas asked. “We know that China will deny the evidence. This review process serves no purpose other than to delay its release again.”

Earlier this week Abbas expressed concern that Bachelet’s long-delayed trip “is another tactic to delay the release of her report on Uyghur genocide until her term expires” on August 31.

The U.S. government has determined that China’s treatment of Uyghurs and other minority Muslims in Xinjiang, including mass incarceration, forced slave labor, and forced sterilization, amounts to crimes against humanity and genocide. Beijing denies that abuses are taking place.

Bachelet has sought permission to visit the region since first assuming her U.N. post in the fall of 2018. She has finally been given the go-ahead to do so next month, and an advance team arrived in China this week.

But her office has yet to release its report.

Last September, Bachelet announced that the OHCHR was “finalizing” the report, “with a view to making it public.”

Three months later, a OHCHR spokesperson said the report’s release was expected within several weeks, and in late January he said the office was “very much in the last stages of the process of finalizing such a report.”

The fact the report has yet to see the light of day is drawing growing scrutiny, with more than 190 organizations calling on Bachelet last month to release it immediately.

The World Uyghur Congress has announced plans for a protest outside the OHCHR on May 13.

“We have been waiting for the release of the high commissioner’s report since September,” the group’s president, Dolkun Isa, said this week. “Why has it been delayed?”

Last week U.S. Ambassador to the U.N. Linda Thomas-Greenfield urged Bachelet in a tweet to release the report, noting that she had said it was being “finalized” last September.

Thomas-Greenfield added that the high commissioner during her upcoming visit “must have unhindered and unfettered access.”

The ambassador’s intervention drew swift criticism from China’s mission to the U.N., which described it as “political manipulation and malicious pressure” and added that “[s]uch indiscreet remarks only reveal the U.S. intention to set up obstacles to disrupt the visit.”

‘What is she waiting for? The green light from the Chinese government?’

“If the U.N. high commissioner for human rights herself does not defend the founding principles of the United Nations and uphold the fundamental rights of all people, who is going to be out there defending innocent people like my sister?” she asked. 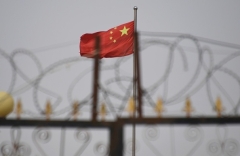 China’s national flag flies behind razor wire at a housing compound in Xinjiang in 2019. (Photo by Greg Baker/AFP via Getty Images)

“If she doesn’t release the report, and if she isn’t given unfettered access, this trip will only hurt the Uyghur people,” Abbas said. “She needs to release that report. She has all the evidence. What is she waiting for? The green light from the Chinese government?”

(Abbas’ sister Gulshan Abbas, a medical doctor, has been incarcerated since September 2018, when she was arrested six days after Rushan Abbas spoke at a Hudson Institute event on the situation in Xinjiang.

She was sentenced to 20 years’ imprisonment on purported terror-related charges. Rushan Abbas says her sister is being punished for her family’s rights activism in the U.S.)

Throssell, the OHCHR spokesperson, confirmed Thursday that the advance team for Bachelet’s visit was now in Guangzhou, “and the mission plans include a visit to Xinjiang.”

Although campaigners are hoping the situation in the far-western region will dominate the trip, Throssell said the visit will allow Bachelet and OHCHR “to engage in a dialogue with the Chinese authorities on a range of domestic, regional and global human rights issues.”

Chinese foreign ministry spokesman Wang Wenbin this week repeated Beijing’s position that the goal of Bachelet’s visit “is to promote exchange and cooperation.”

“We are opposed to political manipulation by exploiting the matter.”

The Uyghur Tribunal, an unofficial U.K.-based body that held three hearings last year on the situation in Xinjiang, said in a December “judgment” that it had found evidence China had detained “hundreds of thousands of Uyghurs – with some estimates well in excess of a million … without any, or any remotely sufficient, reason and subjected [them] to acts of unconscionable cruelty, depravity and inhumanity.”

Then-Secretary of State Mike Pompeo in 2019 described the atrocities reported in Xinjiang as the “stain of the century.”