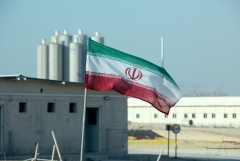 (CNSNews.com) – Iran’s continuing refusal to allow U.N. nuclear inspectors to access two suspect sites should prompt the reimposition of all U.N. sanctions that were lifted under the 2015 nuclear deal, critics of the regime said at the weekend.

Two International Atomic Energy Agency (IAEA) quarterly reports due to be presented to its board of governors later this month were leaked to wire agencies late last week, and both reflect concerns about the regime’s behavior.

They prompted Israeli Prime Minister Binyamin Netanyahu and an exiled dissident who helped to expose Iran’s covert nuclear program almost two decades ago to call for the U.N. to join the U.S. in reimposing sanctions.

Russia’s permanent representative to the Vienna-based U.N. nuclear watchdog on Saturday accused unnamed “member states” of being behind the “outrageous” leak of the reports ahead of their formal presentation to the board.

“I am absolutely sure that the leaks of confidential #IAEA reports on #Iran aren’t the fault of Secretariat of the Agency,’’ tweeted Mikhail Ulyanov. “This is the responsibility of some individual Member States who leak the reports to #US media in a hope that they will create an unhealthy atmosphere around Iran.”

One of the reports deals with Iran’s ongoing breaches of its commitments in the 2015 Joint Comprehensive Plan of Action (JCPOA), and the other with its stonewalling of IAEA efforts to ascertain the extent of the regime’s past attempts to develop a nuclear weapons capability.

The activities concerned allegedly took place long before Iran and major powers concluded the JCPOA. But Iran under that deal committed to help resolve questions about whether at any time it had carried out work with applications for developing an atomic bomb.

In a previous report, issued last March, the IAEA said it had “identified a number of questions related to possible undeclared nuclear material and nuclear-related activities at three locations that have not been declared by Iran.”

The March report said the IAEA had sought access to two of the three sites, where nuclear material may have been stored or processed, but that “Iran has not provided access to these locations and has not engaged in substantive discussions to clarify the Agency’s questions.”

According to the new report, that evasion is continuing. For more than four months now, it says, Iran has denied the inspectors access.

One of the sites had undergone “extensive sanitization and levelling,” and at another most of the buildings had been demolished – in both cases around the 2003-2004 timeframe.

In the third case, the IAEA had observed “activities consistent with efforts to sanitize part of the location” as recently as last July and following.

The report said the IAEA “calls on Iran immediately to cooperate fully with the agency, including by providing prompt access to the locations specified.”

Netanyahu told a cabinet meeting in Jerusalem on Sunday the international community should join the U.S. in reimposing tough sanctions, now that the IAEA has “determined that Iran refused to give the agency’s inspectors access to secret sites where Iran conducted secret nuclear military activity.” 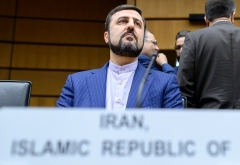 The Iranian regime’s ambassador to the IAEA in Vienna, Kazem Gharib Abadi. (Photo by Joe Klamar/AFP via Getty Images)

Iran’s ambassador in Vienna, Kazem Gharib Abadi, noted the new IAEA report, but did not comment about the complaint over denied access.

After the IAEA’s report last March, Abadi said the requests to visit the sites were based on “fabricated information” from intelligence agencies, and that Iran was under no obligation to comply.

Despite Iran’s denials that it ever sought a nuclear weapons capability, the IAEA determined five years ago that Iran up until 2003 conducted “a range of activities relevant to the development of a nuclear explosive device” – with some of those activities continuing until 2009.

Iran hid its nuclear program from the international community for two decades before the exiled National Council of Resistance of Iran (NCRI) opposition group in 2002 revealed the existence of clandestine facilities at Arak and Natanz.

That exposé sparked an international standoff, the imposition of sanctions and, in time, the beginning of diplomatic efforts that eventually produced the JCPOA in 2015.

The NCRI official responsible was Alireza Jafarzadeh, a U.S.-based representative of the group who later became deputy director of its Washington, D.C., office.

Responding to the latest IAEA reports, Jafarzadeh said they indicated that Iran had never abandoned its nuclear weapons program.

“This regime should have never been allowed any enrichment capabilities, nor provided any ability to do nuclear-related research and development under any pretexts,” he said. “All pathways of the Iranian regime to fissile material must be irreversibly blocked and the ballistic missile program, the purpose of which is to carry a nuclear warhead, must be entirely dismantled.”

Jafarzadeh said the IAEA should refer the regime to the U.N. Security Council, triggering a restoration of all U.N. sanctions.

In the JCPOA, the Obama administration and its partners eased sanctions and released tens of billions of dollars in frozen assets to Iran, in return for restrictions on its nuclear activities.

President Trump withdrew from the agreement in May 2018, and U.S. sanctions were restored in phases.

Iran began to violate its JCPOA commitments after the U.S. exit, in an apparent attempt by the regime to put pressure on European parties to the deal to carry out their obligations and keep it afloat.

The second new IAEA report gives an update on Iran’s breaches, including production of a stockpile of low-enriched uranium well in excess of the amount allowed under the deal, some of which has moreover been enriched to levels higher than the 3.67 percent limit.

Iran has therefore now produced enough LEU, according to the Institute for Science and International Security, “to be able to breakout in as little as three months.”

“Breakout” is the term used for the time needed for an actor to acquire the material needed for one nuclear weapon, once it initiates the work.