UNESCO Deplores Destruction in Ukraine, But Its Heritage Committee Still Plans to Meet in Russia 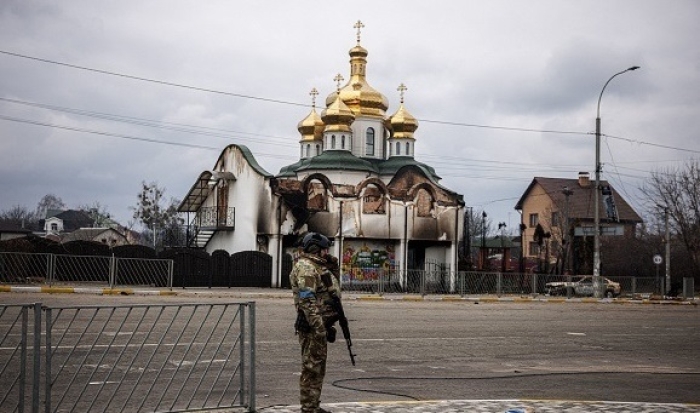 A Ukrainian soldier stands guard on a street in front of a war-damaged church in the city of Irpin, northwest of Kyiv, on March 13. (Photo by Dimitar Dilkoff/AFP via Getty Images)

(CNSNews.com) – As Russian forces continue to bombard Ukraine, the prospect of Russia hosting this year’s annual session of the UNESCO World Heritage Committee this summer is drawing growing opposition from government officials in Ukraine and its supporters in Europe.

UNESCO confirmed on Friday that more than 50 sites of religious, historical or cultural significance in Ukraine have sustained damaged during the Russian invasion.

The Russian offensive has also had a severe impact in other areas falling within the purview of the U.N. Educational, Scientific and Cultural Organization, including education and information.

Yet none of the 21 member-states of the World Heritage Committee has made a formal request for its 45th session to be relocated from Kazan, Russia, where it is currently scheduled to run from June 19-30, UNESCO spokesman Thomas Mallard confirmed.

Any decision to move the session would have to be taken by committee members, in a two-thirds vote or by consensus, not by the Paris-based organization’s leadership.

“The Russian Federation, cynically obliterating everything on their way with their own hands, cannot be an organizer as well as a participant of UNESCO itself,” Tkachenko said.

The call to move the meeting to Lviv is also supported by the city’s mayor, Andriy Sadovyi, who tweeted, “Russia is a terrorist country. Terrorists cannot be a member of the UNESCO. UNESCO must transfer its 45th session from Kazan to Lviv.”

Queries sent to the foreign ministries and UNESCO delegations of the four European Union member-states on the committee – Belgium, Bulgaria, Greece and Italy – and to the E.U.’s delegation to UNESCO, have brought no response.

Lithuania’s minister of culture, Simonas Kairys, has taken a lead in urging UNESCO’s director-general, Audrey Azoulay, to suspend Russia from participation in the organization’s committees and programs, and to move the World Heritage Committee session out of Russia.

“At least 20 places of worship have already been destroyed in the country, including unique historical buildings such as the Saint Elias Church in Chernihiv (11th-12th century),” Kairys wrote.

“Horrible consequences of war have also been faced by Ukraine’s museums, libraries, theatres and other cultural and art institutions. We must understand the immense damage this war has done to the attacked country’s cultural heritage and not turn a blind eye to the barbaric actions of the aggressor.”

Kairys said President Vladimir Putin’s actions in Ukraine were “a total antithesis to the values and goals of UNESCO.” 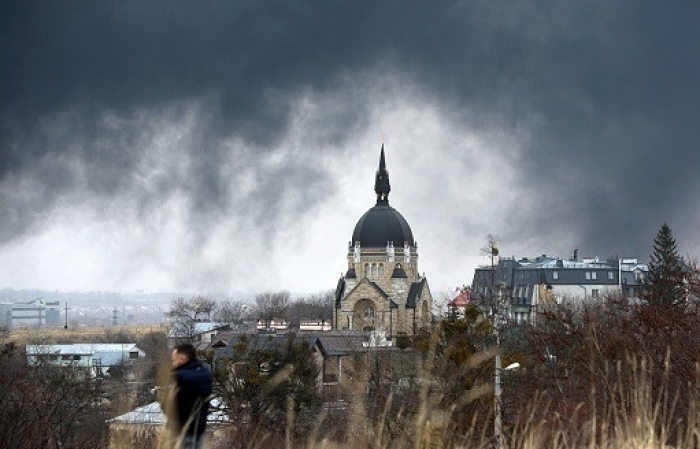 Smoke rises near a church in Lviv after a Russian airstrike on March 26. (Photo by Aleksey Filippov / AFP via Getty Images)

Russia’s invasion has taken a toll in all four of UNESCO’s “spheres of competence” – education, culture, heritage, and information.

More than 4.3 million Ukrainian children have been displaced during the fighting, according to the U.N.  Schools have been closed since the invasion began, but hundreds have been damaged, including almost 50 in one city alone. One of the oldest universities in eastern Europe, the Kharkiv National University, was damaged by a Russian missile in early March.

In the field of information, at least five journalists were killed during the first month of the invasion, according to Reporters Without Borders, which has also reported cases of harassment, intimidation, and abduction of journalists at the hands of Russian forces.

A sixth journalist was reported at the weekend to have been killed while covering the invasion.

A special session of UNESCO’s executive board in mid-March adopted a decision deploring Russia's military aggression and asking Azoulay to monitor the situation and prepare a program of emergency assistance for Ukraine.

Russian representative Igorevich Kuznetsov questioned the need to hold a special session, and protested what he called the politicization of UNESCO.

“One gets the impression that the Western countries, hysterical about the crisis in Ukraine, largely caused by themselves, intend to take our organization hostage in order to satisfy their geopolitical ambitions,” he said.

Kuznetsov’s statement reprised Moscow’s allegations about fighting “neo-Nazis” in Ukraine and its claims that its military strikes have exclusively targeted military installations.

The U.S. has had a difficult relationship with UNESCO, having twice withdrawn from the organization. President Reagan left in 1984, concerned about gross mismanagement and an agenda viewed as pro-Soviet and anti-Western.

Acknowledging reforms, President George W. Bush returned in 2003, but in a decision that took effect at the beginning of 2019, President Trump withdrew again, citing a history of anti-Israel bias.

The Biden administration is exploring a return to UNESCO, a move that would require U.S. taxpayers to provide more than $500 million in purported arrears.

The arrears began accumulating in 2012, after UNESCO admitted “Palestine” as a member, even though it is not a sovereign state.

U.S. law prohibits federal funding for any U.N. body that “grants full membership as a state to any organization or group that does not have the internationally recognized attributes of statehood.”