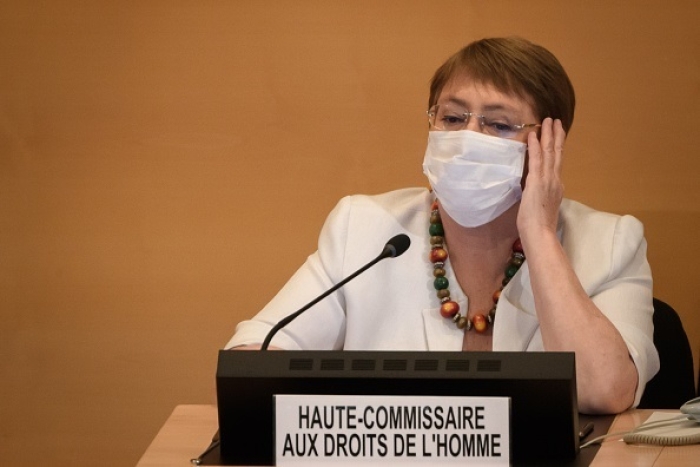 (CNSNews.com) – China’s mission to the U.N. bristled Wednesday when U.S. Ambassador to the U.N. Linda Thomas-Greenfield drew attention to the fact that the U.N.’s human rights office has yet to release a report on the situation in China’s Xinjiang region, months after it was purportedly being “finalized.”

Three months ago, the South China Morning Post cited “sources” as saying that Beijing had insisted, when approving Bachelet’s visit, that the OHCHR not publish the report.

When CNSNews.com earlier this month asked the OHCHR, again, about delays in releasing the report, a spokesperson said, “for now I do not have any updated information.”

The U.S. government has determined that Chinese Communist Party policies and the treatment of Uyghurs and other minority Muslims in Xinjiang constitute genocide.

After meeting on Wednesday with the family of a Uyghur doctor detained in China, Thomas-Greenfield tweeted that the U.S. would continue to push for Dr. Gulshan Abbas’ release, “and speak out against PRC atrocities toward Uyghurs and other members of ethnic and religious minority groups.”

“We urge High Commissioner [Bachelet] to release the [OHCHR] report on human rights issues in Xinjiang, which was being finalized in September 2021,” Thomas-Greenfield added. “And let’s be clear: any visit by the High Commissioner to China must have unhindered and unfettered access.”

China’s U.N. Mission responded in a pair of tweets slamming the ambassador’s comments, and inviting the U.S. to pay closer attention to situations closer to home.

“China welcomes the visit by [Bachelet] including a trip to Xinjiang. This is a normal exchange between two sides,” it said. “There is no place for political manipulation and malicious pressure. Such indiscreet remarks only reveal the U.S. intention to set up obstacles to disrupt the visit.”

“To some U.S. politicians who are obsessed with making lies: STOP turning a blind eye to the human rights violations in your own country. Save your own people from desperate racism, violence and inequality. Smearing and defaming China cannot cover or divert your failure.”

China consistently and vehemently denies allegations of atrocities in its far-western region, characterizing the mass incarceration of more than one million Uyghurs and others as a deliberately misconstrued education and vocational program targeting Islamic radicals.

Bachelet first requested a visit to Xinjiang in September 2018, just days into her new U.N. post after serving two terms as Chile’s socialist president. She said at the time she hoped Beijing would allow a visit to Xinjiang, and voicing concern about “deeply disturbing allegations of large-scale arbitrary detentions” there.

Over the next three years, she periodically updated the U.N. Human Rights Council  (HRC) on her attempts to organize a visit, amid drawn-out discussions between the two sides on the “modalities” for such a visit.

Last September, she reported to HRC member-states that she could report no progress on the hoped-for visit, but said that “in the meantime, my office is finalizing its assessment of the available information on allegations of serious human rights violations in that region, with a view to making it public.”

Seven months later, there has been no sign of the report.

Meanwhile last month, Bachelet told the HRC that she had finally reached an agreement with the Chinese government for a visit, which she expected would take place in May.

“Preparations will have to take into account COVID-19 regulations,” she said. “The government has also accepted the visit [in April] of an advanced OHCHR team to prepare my stay in China, including onsite visits to Xinjiang and other places.”

Bachelet did not mention the pending OHCHR report on Xinjiang.

In March 2021, a full year before Bachelet announced the visit was now to go ahead, Chinese foreign ministry spokesman Wang Wenbin said the purpose of any such visit “should be to promote exchanges and cooperation, not to carry out some kind of ‘investigation’ with China already being presumed as ‘guilty.’ We firmly oppose political manipulation of such issues to strong-arm China.”

On January 28 this year, Colville said he had no update on the timing of the release, only that it would not occur before the opening of the Beijing Winter Olympics, which ran from February 4-20.

He also said there was no linkage between the requested visit to Xinjiang and release of the report, adding, “we see these as separate, parallel discussions.”

“My understanding is we are very much in the last stages of the process, of finalizing such a report,” Colville said.

Almost 200 human rights groups in an open letter in March called on Bachelet to make the report public “without further delay.”

The last time a U.N. high commissioner for human rights visited China was in 2005, when Louise Arbour took part in a Asia-Pacific workshop on “regional cooperation for the promotion and protection of human rights.”

UN Leadership, Member-States Accused of ‘Silence, Fear and Timidity’ Over Uyghurs (May 13, 2021)