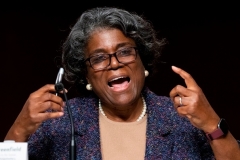 U.S. ambassador to the United Nations-nominee Linda Thomas-Greenfield speaks during her confirmation hearing in January. (Photo by Michael Reynolds/Pool/AFP via Getty Images)

(CNSNews.com) – U.S. Ambassador to the U.N. Linda Thomas-Greenfield on Wednesday said the U.S. re-engagement with the U.N. Human Rights Council had to be approached in a spirit of “humility,” given the “imperfections” of the United States – a nation where white supremacy was woven into “our founding documents and principles.”

The Geneva-based HRC includes some of the world’s most egregious human rights violating regimes. Assuming the U.S. wins a seat when it runs in elections in the fall, it will serve next year alongside such countries as China, Cuba, Libya, Mauritania, Pakistan, Russia, Sudan, and Venezuela’s Maduro regime.

“We immediately re-engaged with the Human Rights Council, and have announced our intention to seek election to that body, so that we can advance our most-cherished democratic values around the globe,” she said.

“Of course, when we raise issues of equity and justice at the global scale, we have to approach them with humility,” the veteran foreign service officer continued. “We have to acknowledge that we are an imperfect union – and have been since the beginning – and every day we strive to make ourselves more perfect, and more just.”

Thomas-Greenfield recalled that, when the U.N. marked the International Day for the Elimination of Racial Discrimination last month, she had delivered a speech to the General Assembly in which she shared some personal stories of her family’s experience of racism, of growing up in the segregated South  where “on weekends, the [Ku Klux] Klan burned crosses on lawns in our neighborhood.”

“I shared these stories and others to acknowledge, on the international stage, that I have personally experienced one of America’s greatest imperfections,” she told the National Action Network virtual event. “I have seen for myself how the original sin of slavery weaved white supremacy into our founding documents and principles.”

Thomas-Greenfield spoke about the killings of George Floyd and other black Americans, and hate crimes and discrimination targeting minorities, including Asian Americans.

“That’s why the Biden-Harris administration has made racial equity a top priority across the entire government,” she said. “And I’m making it a real focus of my tenure at the U.S. Mission to the United Nations.”

Reacting to Linda-Greenfield’s remarks, Sen. Tom Cotton (R-Ark.) commented, “In the Cold War, we relied on Soviet diplomats to condemn America at the UN; in the Biden administration, we just do it ourselves.”

In her remarks, Thomas-Greenfield did go on to speak about racism in other parts of the world, citing mass rights violations faced by Rohingya Muslims in Burma and Uyghur Muslims in China’s Xinjiang region.

But she told the National Action Network she remained hopeful – “in part because of the influence and the insistence of organizations like yours.”

“Just look at the way the Black Lives Matter movement spread this past summer,” she said. “What took hold in the streets of Minneapolis made it to Monrovia, and Madrid, and London, and Sydney, and Berlin, and Cape Town, Stockholm, and Rio de Janeiro, and Tokyo, and on, and on, and on.”

The Biden administration’s move to reconnect with the HRC followed its predecessor’s decision to withdraw in 2018, citing a disproportionate focus on Israel and the fact that “human rights abusers continue to serve on and be elected to the council.”

The Trump, Obama, and Bush administrations all pressed for reforms to the U.N.’s top human rights body – the latter even as its founding charter was being hammered out in 2005-2006 – but without success. The Bush administration ultimately chose to shun the HRC, while the Obama administration joined and engaged with it, also failing in its efforts to improve it.

Thomas-Greenfield is a former assistant secretary of African Affairs and ambassador to Liberia. She also held other foreign diplomatic postings, including in Nigeria, Gambia, and Kenya.