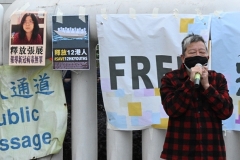 A Hong Kong pro-democracy activist, Lee Cheuk-Yan, protests on Monday against the jailing of Zhang Zhan, whose image appears in the poster behind him. (Photo by Peter Parks/AFP via Getty Images)

(CNSNews.com) –  Days before a team of international experts is expected to visit Wuhan to investigate the origins of the coronavirus outbreak, China’s jailing of a citizen journalist for her critical coverage of the outbreak is drawing strong condemnation, including from the U.S. government and the United Nations.

Zhang Zhan was convicted in Shanghai on Monday of “picking quarrels and provoking trouble,” and sentenced to four years’ imprisonment, according to her lawyer.

The U.S. Mission to the United Nations in Geneva said Zhang had been punished “for challenging CCP [Chinese Communist Party] propaganda and highlighting the Chinese government’s mismanagement of the COVID-19 outbreak in Wuhan.”

Secretary of State Mike Pompeo slammed what he called the “sham prosecution and conviction” of Zhang, calling for her immediate and unconditional release.

He said the CCP “has shown once again it will do whatever it takes to silence those who question the party’s official line, even regarding crucial public health information.”

“Because of the CCP’s gross malfeasance, the rest of the world relied heavily on uncensored reports from citizen journalists like Zhang to understand the true situation in Wuhan after the CCP-imposed strict media controls were enforced and a controllable outbreak turned into a deadly global pandemic,” Pompeo said. “Her hasty trial, to which foreign observers were denied access, shows how fearful the CCP is of Chinese citizens who speak the truth.”

Zhang, a 37-year-old former lawyer living in Shanghai, traveled to Wuhan at the beginning of February and began uploading video clips online of interviews with residents, footage of public places and health facilities, and commentaries about how the city was dealing with the crisis.

Zhang was detained in mid-May and has been in custody ever since. She was force-fed after launching a hunger strike to protest her incarceration, and is reportedly in poor health.

Zhang was formally charged in November, according to the Network of Chinese Human Rights Defenders:

“The indictment accused Zhang Zhan of traveling to Wuhan on February 3, 2020 and that she ‘sent a large amount of false information’ on WeChat, Twitter, and YouTube and ‘accepted interviews with overseas media Radio Free Asia and Epoch Times and maliciously stirred up the Wuhan epidemic situation.’ The procuratorate recommended she receive a 4-5 year sentence.”

“We are deeply concerned by the 4-year prison sentence imposed on citizen journalist Zhang Zhan,” the office of U.N. high commissioner for human rights Michelle Bachelet said on Monday. “We raised her case with the authorities throughout 2020 as an example of the excessive clampdown on freedom of expression linked to COVID-19 & continue to call for her release.”

Zhang is the first person in China known to have been jailed over the dissemination of information relating to the pandemic, although at least three other people who had live-streamed updates from the outbreak epicenter city went missing after their arrest in February, evidently also victims of the state’s attempts to oversee the outflow of information and control the narrative.

Chen Qiushi arrived in Wuhan in January, and over a two-week period documented on a blog what he saw at hospitals, funeral parlors and elsewhere in the city. In early February he posted a message saying he had obtained evidence about how the epidemic had overwhelmed Wuhan’s health system, then disappeared. Last September it was reported that he was being held at his parents’ home, under supervised state surveillance.

Li Zehua, another citizen journalist who also disappeared early in the year, later resurfaced in a YouTube video, saying he had been placed under quarantine but not charged. The whereabouts of a third missing citizen journalist, Wuhan resident Fang Bin, remain unknown.

Authorities also punished and silenced other whistleblowers, including a Wuhan doctor who was later himself infected, and died in early February. (Wuhan’s public security bureau later apologized to Dr. Li Wenliang’s family, and the U.S. Senate in March passed a bilateral resolution honoring him.)

Despite scathing criticism from the United States, Australia and others, Chinese foreign ministry and CCP officials have insisted throughout the year that China dealt with the outbreak and resulting pandemic in a transparent and cooperative manner.

Last May Sen. Ted Cruz (R-Texas) introduced a bill directing the president to sanction officials responsible for acts of censorship in China, specifically including acts that penalize Chinese citizens “for the public dissemination of accurate epidemiological information, including information related to emerging diseases or pathogens.”

The Ending Medical Censorship and Cover Ups in China Act was referred to the Senate Foreign Relations Committee and has not advanced.

Ahead of the expected arrival next week of a World Health Organization-convened team of international experts, the CCP organ Global Times on Sunday published an interview with a Wuhan respiratory medicine specialist, Zhang Jixian – one of the first to report on the appearance of the novel coronavirus – who disputed that China had sought to cover-up the outbreak in its early stages.

“This is what happens in Communist China if you try to tell the truth about the COVID-19 outbreak,” tweeted Sen. Marsha Blackburn (R-Tenn.) “You’re jailed for ‘picking quarrels and provoking trouble.’”

“Communism is a cancer on the world,” tweeted Young Americans for Liberty, while U.N. Watch executive director Hillel Neuer noted that China is due to join the U.N. Human Rights Council for a new three-year term on Friday.  He had a one-word question for U.N. rights chief Bachelet: “Why?”