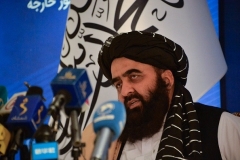 (CNSNews.com) – U.S. officials have held two days of “candidate and professional” talks in Doha, Qatar with representatives of the Taliban, including U.N.-sanctioned terrorists, for the first time since the terrorist group seized power in Afghanistan in August.

According to a State Department readout of the talks, topics on the agenda included human rights and women’s rights (“the meaningful participation of women and girls in all aspects of Afghan society”) terrorism concerns, safe passage for Americans and others wanting to leave, and the provision of humanitarian aid.

The statement, from State Department spokesman Ned Price, made no reference to discussion of issues relating to recognition of the regime in Kabul, which is seeking international legitimacy and wants Afghanistan’s seat at the United Nations.

“The discussions were candid and professional with the U.S. delegation reiterating that the Taliban will be judged on its actions, not only its words,” Price said.

A Taliban statement on the weekend exchanges, issued by the regime’s foreign ministry spokesman Abdul Qahar Balkhi, said that “all relevant issues of interest were discussed in detail in the meeting” and that “efforts should be exerted to restore diplomatic relations to a better state.”

Taliban deputy information and culture minister Zabihullah Mujahid said ahead of the talks that the subjects on the group’s agenda included the implementation of the Feb. 2020 U.S.-Taliban Doha agreement; the question of Afghanistan’s frozen assets; and recognition “by the international community, the U.S. and U.N.”

Price’s statement did not identify the members of the “interagency delegation” that traveled to Doha for the meetings, but Reuters reported that they included State Department deputy special representative Tom West and Sarah Charles, assistant to the administrator of the USAID bureau for humanitarian assistance.

Since Kabul fell to the Taliban in mid-August, the group has posted on its social media sites photos of its interactions with foreign government officials, but it did not do so in this case.

Humanitarian assistance for the Afghan people featured prominently in the talks.

“IEA [Islamic Emirate of Afghanistan] welcomed this assistance and remarked that it will cooperate with charitable groups in delivering humanitarian assistance to those deserving transparently, and will facilitate principled movement of foreign nationals,” he said.

Overall, the Taliban said the talks “went well,” and added that “it was agreed that such meetings will continue to be held in the future if required.”

Of the Taliban officials who met with the U.S. delegation, Muttaqi, Delawar, Khairkhwah, and Wasiq are all on the U.N. Security Council consolidated list of sanctioned terrorists, and as a result are subject to an assets freeze and travel ban.

Wasiq and Khairkhwah were also members of the “Taliban Five,” terrorists at Guantanamo Bay released by the Obama administration in 2014 in exchange for U.S. Army Sgt. Bowe Bergdahl, who had been held by the Haqqani Network since 2009.

In his previous role as deputy intelligence chief of the first Taliban regime, Wasiq “was in charge of handling relations with Al-Qaeda-related foreign fighters and their training camps in Afghanistan,” according to his U.N. sanctions listing. “He was also known for his repressive methods against Taliban opponents in the South of Afghanistan.”