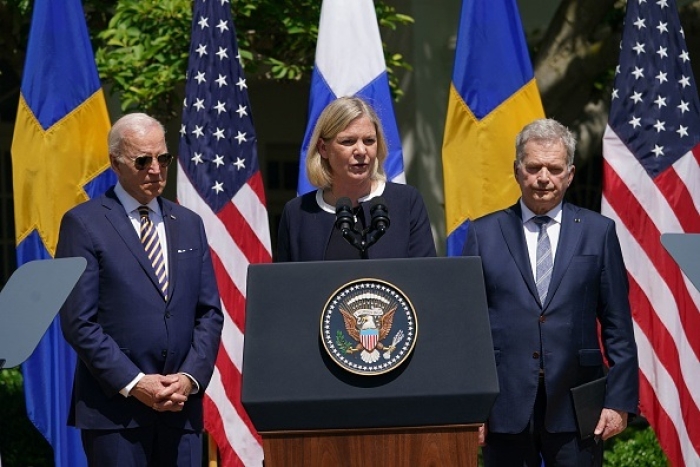 President Biden hosted Swedish Prime Minister Magdalena Andersson and Finnish President Sauli Niinisto at the White House in May, in a show of support for their aspirations to join NATO. (Photo by Mandel Ngan/AFP via Getty Images)

(CNSNews.com) – The House of Representatives in a strong bipartisan message to Russian President Vladimir Putin voted on Monday evening 394-18 in support of Finland and Sweden’s applications to join NATO.

The measure called on all 30 NATO allies to approve accession for the two Nordic countries, which in a reversal of long-held military non-alignment policies applied to join the transatlantic alliance in response to Putin’s invasion of Ukraine.

It is the U.S. Senate that will provide advice and consent to ratification of the accession protocols. But the House resolution, Rep. Costa (D-Calif.) said ahead of Monday’s vote, was designed to demonstrate “that the United States government can speak with one voice – one voice in the resolute support of our Nordic allies and unwavering support for Ukraine’s fight for freedom and democracy.”

Supporters of the resolution on both sides of the aisle had words for Putin as they urged colleagues’ support for the measure.

“Vladimir Putin launched his unprovoked war of aggression against Ukraine and the inhumane assault on innocent civilians thinking that he would be able to divide the NATO alliance,” said Rep. Mike Turner (R-Ohio). “He was mistaken.”

“We must ensure that Putin’s invasion will result in a strategic defeat for Russia,” said Majority Leader Steny Hoyer (D-Md.).

“I pause, Mr. Speaker, to emphasize that point: Vladimir Putin must not win this war. Not only for the sake of the Ukrainians and their extraordinary bravery and the bravery and leadership of Mr. [Volodymyr] Zelenskyy, their president, but because the free world needs to send a very strong and clear and unmistakable message that tyranny will not prevail.”

“We must send a message to dictators around the world that this action is unacceptable and will be opposed – to victory – by the free world,” Hoyer said.

The resolution states that Sweden and Finland have “highly capable militaries [that] are interoperable with NATO forces and would increase and fortify NATO’s collective security by increasing the security and stability of the Baltic Sea region and Northern Europe.”

Turner noted that Finnish and Swedish forces have taken part in NATO-led missions in Afghanistan, Iraq, and the Balkans. He also said they were committed to spending two percent of their gross domestic product on defense.

The pledge to achieve that level of military spending was made by NATO allies at a summit in 2014, with a target date of 2024.

As reported earlier, Finland is already closer to reaching the benchmark than two-thirds of current NATO members, and is on track to reach it by next year. Sweden has further to go to achieve the NATO commitment.

According to the latest NATO figures, only nine of the 30 allies have already reached or exceeded the two percent mark. They are the United States, Britain, Croatia,  Estonia, Greece, Latvia, Lithuania, Poland, and Slovakia.

The resolution passed on Monday urges all members of NATO to meet the two percent defense spending pledge. 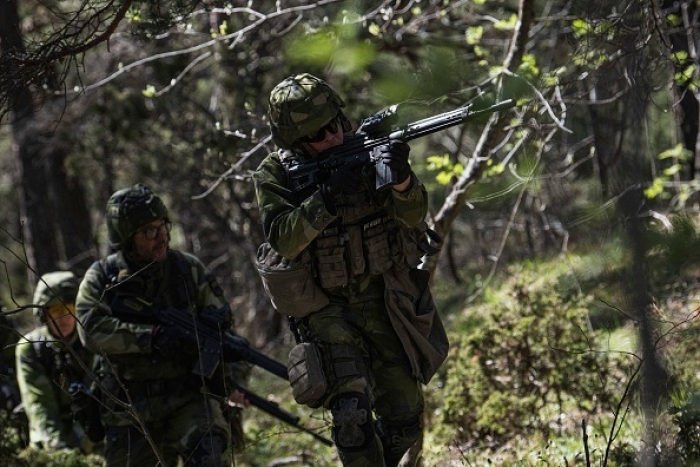 Swedish soldiers take part in an exercise on the island of Gotland in May. (Photo by Jonathan Nackstrand/AFP via Getty Images)

The 18 lawmakers who voted against the measure were all Republicans, several of whom who have voted previously against legislation supporting Ukraine against the Russian invasion.

“America can’t afford to subsidize socialist Europe’s defense, nor should we,” tweeted Massie after the vote. “Tonight, I voted against the House Resolution urging NATO’s expansion into Sweden and Finland.”

Massie’s tweet linked to a news report on the fact that most NATO allies have yet to meet the two percent of GDP defense spending goal.

Turner said on Monday that the Senate Foreign Relations Committee was expected to consider the NATO accession protocols for Sweden and Finland within the next week.

Last May 80 senators expressed support for the two countries’ aspirations to join NATO.

Finland Already is Closer to NATO’s Defense Spending Target Than Most Current Allies (May 13, 2022)