US Leading Push to Oust Russia From UN Human Rights Council: ‘They Have Turned It Into a Farce’ 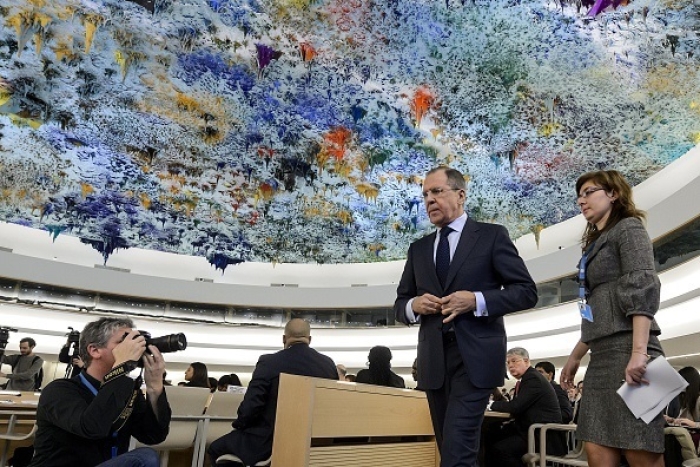 Russian Foreign Minister Sergei Lavrov arrives to deliver a speech at a previous session of the U.N. Human Rights Council in Geneva. (Photo by Fabrice Coffrini/AFP via Getty Images)

(CNSNews.com) – The Biden administration announced on Monday that it will push for Russia’s suspension from the U.N. Human Rights Council, in what will the first time in 11 years, and the second time ever, that a member has been ousted from the Geneva-based body.

Following growing calls for Russia’s ejection, from a bipartisan group of U.S. senators among others, Ambassador to the U.N. Linda Thomas-Greenfield confirmed that the U.S. will work with other member-states to have Russia removed from the HRC.

“We cannot let a member-state that is subverting every principle we hold dear to continue to sit on the U.N. Human Rights Council,” Thomas-Greenfield said during a visit to Romania.

At the State Department, spokesman Ned Price confirmed the move, which comes amid allegations that Russian troops massacred Ukrainian civilians in Bucha, a town near Kyiv occupied by the invading forces until their redeployment last week.

He quoted the ambassador as saying Russia should not be allowed to use its seat on the HRC for propaganda, “to suggest that Moscow has any concern about human rights.”

“She called it a farce. That is precisely what it is,” Price said. “They have turned it into a farce.”

The fact that some of the world’s most abusive regimes have occupied seats on the HRC has long frustrated rights advocates, and was a key reason given for the Trump administration’s decision to withdraw in 2018.

Despite that, only once before has a member-state been removed, when the General Assembly in 2011 agreed, without a vote, to suspend Muammar Gaddafi’s Libya, at a time when the regime was brutally crushing anti-government protests.

The U.N. resolution that created the council in 2006 provides for suspension of a member-state that “commits gross and systematic violations of human rights,” but doing so requires the support of two-thirds of the “present and voting” members of the 193-country General Assembly.

Price expressed confidence that there would be sufficient support to oust Russia from the HRC, pointing to two recent votes in New York.

The General Assembly on March 2 voted 141 to five (Russia, Belarus, Eritrea, North Korea, and Syria’s Assad regime) to condemn Russia’s invasion of Ukraine, and again on March 24, in a 140-5 vote, to demand civilian protection in Ukraine, blaming the “dire” humanitarian situation on Russia.

The Biden administration reversed its predecessor’s rejection of the HRC and was elected last fall onto the council for a term that began in January. The move mirrored that of the Obama administration in 2009, which backed away from the Bush administration’s shunning of the council.

In both cases the incoming Democratic administration acknowledged the problems – primarily the presence in its ranks of abusive regimes, and a disproportionate critical focus on Israel – but argued that the best way to reform the council was from within.

White House press secretary Jen Psaki said President Biden “believes it's ludicrous for Russia to be a member of the Human Rights Council.”

Asked whether he held the same view on China’s HRC membership, given his administration’s determination that China has committed genocide in Xinjiang, Psaki said the international “focus right now” is on Russia.

Monday’s use of the word “farce” to describe Russia’s participation in the HRC echoed that of one of Thomas-Greenfield’s predecessors, Nikki Haley, who led the Trump administration’s withdrawal from the HRC after an unsuccessful effort to reform it.

Days after the Biden administration took office, Haley said the U.S. returning to the HRC without demanding reforms first would give “credibility to a farce.”

“We spent a whole year trying to negotiate with 193 countries on changing and reforming the Human Rights Council,” she recalled in a Fox News interview. “Right now you have every murderer, dictator and thief on that council.”

Meaningful reform of the HRC would require structural changes. Any member-state can run for a seat, and abusive regimes often do so, securing a platform from which to condemn their chosen targets while protecting themselves and allies from condemnation.

Seats are earmarked for regional groups, which more often than not put up “closed slates” of candidates – the same number of candidates as there are seats available – making “elections” a formality.

Behind the secret ballot, the General Assembly has ushered onto the HRC, often with large vote margins, members like Russia, China, Cuba, Pakistan, Saudi Arabia, Venezuela and others with poor human rights records.

Last week U.N. secretary-general Antonio Guterres’ spokesman raised eyebrows when asked about Guterres’ position on the question of Russia’s removal from the HRC.

After noting that membership was “a question for member-states,” Stephane Dujarric added, “there is a certain level of concern about the setting of a dangerous precedent and I will leave it at that.”

Dujarric made a similar comment a fortnight earlier, when asked about calls to have Russia suspended from another U.N. agency, the World Tourism Organization.

He was quoted as saying Guterres felt suspending Russia from the UNWTO “could set a detrimental precedent to the functioning of the multilateral system.”

(The UNWTO has called an extraordinary general assembly on April 27-28 to discuss a request to suspend Russia, a spokesperson confirmed on Monday.)

“I have nothing to add to what my colleague Stephane said,” Haq said. “Of course, we recognize fully that any decision rests with the member-states, and the matter is in their hands, as Stephane has acknowledged.”

“On the contrary: failing to enforce the Human Rights Council’s own rules – members must uphold the highest standards & gross abusers face suspension – would be dangerous,” tweeted the group’s executive director, Hillel Neuer.

During an HRC session last month, Neuer circulated a draft General Assembly resolution to remove Russia from the HRC.

“Regular people around the world ask, why does the Human Rights Council include so many non-democracies?” he asked in a statement to the council.

Responding to the argument that having a “big tent” can help countries with poor records learn and improve, Neuer asked whether that had applied in the case of Russia, which has been elected repeatedly onto the council.

Had Russia improved, Neuer asked, “or on the contrary, did Russia only assassinate more journalists, poison more dissidents, and launch more deadly military invasions than ever before?”

“Does the U.N. have to keep electing the world’s worst abusers, dictatorships whose only intent is to win a false badge of international legitimacy?”