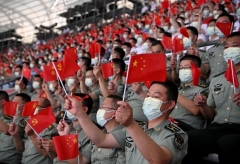 Celebrations ahead the 100th anniversary of the founding of the CCP, at the Beijing national stadium on Monday. (Photo by Noel Celis/AFP via Getty Images)

“To assist General Secretary Xi Jinping in his commemoration of CCP history, I’ve introduced a resolution that details the dozens of crimes against humanity from across the last century of the party’s history,” Gallagher said during a House Republican press conference.

“The point here is to illustrate that the abuses we’re seeing from the party today, including the genocide in Xinjiang, is not a new phenomenon,” he said. “Human rights abuses are hardwired into the Chinese Communist Party’s very DNA.”

Gallagher said that in the run-up to Thursday’s 100th anniversary events, the CCP has ordered theaters to screen propaganda films and is lighting up buildings and bridges with the hammer and sickle.

“CCP officials have even set up a website where individuals can report on their neighbors and the, ‘historical nihilists’ who, ‘defame CCP heroes or deny the excellence of advanced socialist culture.’”

(The South China Morning Post says the Chinese government coined the term “historical nihilism” in reference to “discussion or research that challenges its official version of history.”)

Gallagher’s resolution, which has attracted three Republican and three Democratic co-sponsors, has been referred to the House Foreign Affairs Committee, but he called on Pelosi to bring it before the House this week. Queries sent to Pelosi’s office brought no response by press time.

The bipartisan resolution concludes by saying the House “looks forward to the day that the Chinese Communist Party no longer exists.” (Photo: CNSNews.com)

He said doing to would “allow us to send an unambiguous message that we do indeed ‘deny the excellence of advanced socialist culture,’ and we can lay the CCP’s true nature bare for all the world to see,” he said.

The text comprises largely a list of atrocities, purges, mass executions, and policies resulting in mass starvation in China over the past century, at the cost of millions of lives.

The incidents recorded began as early as 1930 – just nine years after the party was founded in Shanghai, and 19 years before its victory over nationalists resulted in the establishment of the People’s Republic of China.

They continue to the present day, with the ongoing abuses against Uyghurs and other minority Muslims in Xinjiang, which the U.S. government and Canadian and British parliaments have determined to constitute genocide.

The resolution concludes with the House:

--Condemning the CCP “for 100 years of gross violations of human rights, including repression, torture, mass imprisonment, and genocide”

--Calling on the U.S. and allies and partners to support human rights in China, “including through the use of technology to support and enable free expression and information”

--Declaring that it “looks forward to the day that the Chinese Communist Party no longer exists.”

Xi Jinping is due to address a “grand gathering” marking the centenary of the CCP (officially the Communist Party of China, or CPC) at Beijing’s Tiananmen Square on Thursday morning, with a speech that will be beamed live across the country of 1.4 billion people.

An exhibition on the party’s version of its history opened in Beijing recently, designed according to a senior politburo member, to “help guide party members, officials, and the public to have a profound understanding of why the CPC is so capable, why Marxism works, and why socialism with Chinese characteristics excels.”

State media have been hyping the centenary for weeks, complete with posters highlighting Xi’s slogans about the party and socialism. They include:

“In contemporary China, the essence of patriotism is loving our country, our party and socialism all and at the same time.”

“Times have changed, the situation has changed, but the ideals and causes that we communists have been fighting for have not changed.”

“The past 100 years have seen the CPC unswervingly fulfilling its original aspiration and founding mission, working hard to lay a foundation for its great cause, and making glorious achievements and charting a course for the future.”

Marking “key moments in 100 years,” the CCP’s China Daily has published a series of posters under the heading, “Path to Glory.”

One of the more recent “key moments” featured in the posters relates to the coronavirus pandemic, which began with an outbreak in Wuhan, China before spreading across the globe, causing economic turmoil and accounting for more than 3.9 million deaths in 184 countries and territories.

“China successfully overcomes tremendous difficulties in 2020 brought about by the COVID-19 pandemic, the most challenging public health crisis since the founding of the PRC,” the CCP poster states. “China emerges as the only major world economy to achieve positive growth that year.”

The authors of The Black Book of Communism: Crimes, Terror, Repression put the estimated death toll in China as a result of CCP rule at 65 million.