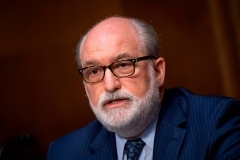 (CNSNews.com) – A top U.S. health official took the World Health Organization to task this week for a sluggish and non-transparent approach towards a long-planned mission to China to investigate the origins of the coronavirus that emerged in the city of Wuhan late last year, noting that member-states just days ago had been made aware of the “terms of reference” for the mission.

Garrett Grigsby, the director of the Office of Global Affairs at the Department of Health and Human Services, was addressing the WHO’s World Health Assembly by video link, 175 days after its member-states passed a resolution mandating an inquiry into the “zoonotic source” – or how the virus now blamed for almost 1.3 million deaths worldwide was first able to jump from animals to humans.

When the resolution known as WHA73.1 was passed on May 19, WHO Director-General Tedros Adhanom Ghebreyesus said the inquiry would begin its work “at the earliest time possible.”

In mid-July, two WHO experts arrived in China for a three-week “pre-mission” visit to “develop the scope and terms of reference for a WHO-led international mission.” When they left on August 2, Tedros said the terms of reference – essentially the criteria for the mission – had been drafted.

“The international team will include leading scientists and researchers from China and around the world,” he said. “Epidemiological studies will begin in Wuhan to identify the potential source of infection of the early cases.”

One hundred days after those words from Tedros, Grigbsby told the WHA on Tuesday that “member-states were made aware of the terms of reference [TOR] for the investigation into the origins of the virus only a few days ago.”

“The TOR was not negotiated in a transparent way with all WHO member-states,” he charged. “The TOR, and the investigation itself, appear to be inconsistent with the mandate provided by member-states in WHA73.1.”

“Understanding the origins of COVID-19 through a transparent and inclusive investigation is what must be done to meet the mandate.”

Stressing the urgency of the situation, Grigbsby said, “We are quite literally in the fight of our lifetime as the COVID-19 pandemic is causing death and societal disruption, and we must collectively determine how to prevent such a pandemic from ever happening again.”

When the resolution was passed last May, the COVID-19 death toll stood at around 319,000 and the number of confirmed cases at below five million. Today the number of deaths stands at 1.283 million, and more than 52 million cases have been reported.

Early last month Michael Ryan, director of WHO’s emergencies program, reported to the WHO executive board that the agency had prepared a list of international experts for the mission, and that the list “has been submitted to Chinese authorities for their consideration and for next steps in order to deploy that team.”

President Trump earlier this year accused the WHO of being too soft on China, and the administration gave the U.N. agency notice that it was withdrawing. The U.S. is the WHO’s biggest funder by far. Democrat Joe Biden has said he would rejoin the organization.

Despite concerns expressed repeatedly by the U.S., and by a number of other countries, the Chinese government continues to portray its response to the pandemic in a positive light.

“China will continue playing an active role in the global efforts to study the traceability and transmission routes of COVID-19 and working with the international community to contribute to global virus tracing and anti-epidemic cooperation,” foreign ministry spokesman Wang Wenbin said on November 2.

“The tracing of the virus is an ongoing process that may involve many countries and places,” he told a briefing. “We hope all relevant countries will adopt a positive attitude and cooperate with WHO like China does.”