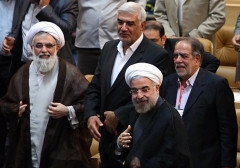 (CNSNews.com) – The State Department on Wednesday announced visa restrictions on one of the Iranian regime’s most notorious establishment figures, a former intelligence minister implicated in acts of terrorism on three continents in the 1990s.

Ali Fallahian is the latest of more than 150 individuals around the world to be designated by the Trump administration under legislation requiring the executive branch to bar entry to foreign officials for human rights abuses and corruption. Immediate family members are included in the ban.

Among the victims of terrorism linked to Fallahian are Argentinian Jews, American military personnel, exiled Iranian dissidents, and scores of people killed in suicide bombings and other attacks in Israel – including a 20-year-old American college student.

Now in his 70s, Fallahian (Fallahijan) led the regime’s Ministry of Intelligence and Security (MOIS) from 1989 to 1997, during which time “he was involved in multiple assassinations and attacks across the globe,” Secretary of State Mike Pompeo said Wednesday.

He ran unsuccessfully for the presidency of Iran in 2001, and from 2007 to 2016 was a member of the Assembly of Experts, a powerful body of religious scholars.

Fallahian is wanted in several countries for some of the deadliest acts of international terrorism carried out by the regime and its proxies. They include:

April 1990:  Iranian dissident Kazem Rajavi of the National Council of Resistance of Iran, a former ambassador to the U.N., was shot dead in Geneva. The Swiss in 2006 issued a warrant for Fallahian’s arrest in connection with the assassination.

September 1992:  Four Iranian Kurdish dissidents were shot dead in a restaurant in Berlin. An Iranian MOIS operative was later convicted and sentenced to life imprisonment, along with a Lebanese co-accused. (Germany freed and deported them after they had served just 15 years.)

The lengthy trial ended with the court’s finding that the assassination had been ordered by a secretive regime body called the Special Affairs Committee, whose members included Fallahian.

The finding prompted the E.U. to curtail the granting of visas to MOIS personnel and suspend bilateral ministerial visits. A warrant was issued in Germany for Fallahian’s arrest.

Interpol issued “red notices” for six of the nine suspects, including Fallahian. (All remain at large except the Lebanese, Imad Mughniyah, killed in a bomb blast in Syria in 2008.)

April 1995: A suicide bomber drove an explosive-rigged van into an Israeli bus near the Gaza Strip, killing eight people and wounding more than 30 more. Among the dead was Alisa Flatow of New Jersey, a Brandeis University student taking part in an independent foreign study program in Israel.

A U.S. federal court in 1998 found the MOIS was the regime’s conduit of funding to the terrorist group behind the attack, the Palestinian Islamic Jihad (PIJ). It held Fallahian – along with supreme leader Ayatollah Ali Khamenei and the late President Ali Akbar Rafsanjani – responsible for Flatow’s death.

The U.S. government designated the PIJ as a foreign terrorist organization in 1997. Funded virtually solely by Iran, the group has been accused of killing more than 100 Israelis in terror attacks.

A U.S. federal court in 2006 found that Fallahian’s MOIS and the Islamic Revolutionary Guard Corps (IRGC) were responsible, having financed, trained and provided travel documents to the terrorists who carried it out.

Fallahian was designated Wednesday under Section 7031(c), a provision built into annual State and foreign operations appropriations legislation for more than a decade, barring entry of foreign officials involved in gross rights violations or significant corruption, and their immediate family members.

The section has authorized public designations since 2015, although all so far have occurred under the Trump administration.

Since the first, in February 2018, more than 150 people, from over 30 countries, have been publicly designated under Section 7031(c), ranging from Cuba’s Raul Castro to 13 former Salvadorian military officials involved in the extrajudicial killings of six Jesuit priests in 1989.

The biggest single group designation, in April 2019, was that of 16 Saudis “for their roles in the murder of Jamal Khashoggi.” The self-exiled Saudi writer was murdered in the Saudi Consulate in Istanbul the previous October.

The 16 did not include crown prince Mohammed bin Salman, whom the U.S. Senate in a unanimous resolution declared “responsible for the murder” of Khashoggi.