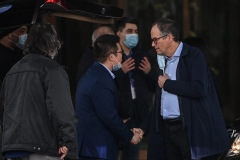 WHO team leader Peter Ben Embarek, right, and other members of the group leave their Wuhan hotel after wrapping up their visit last Wednesday. (Photo by Hector Retamal/AFP via Getty Images)

(CNSNews.com) – The United States made clear at the weekend it was not taking at face value the early findings of a World Health Organization-convened mission to Wuhan to investigate the source of the coronavirus outbreak, voicing “deep concerns” about the process and the way the findings were made public.

The U.S. stance brought a sharp retort from the Chinese government, which has been trying to turn the focus now onto claims the virus causing COVID-19 could have originated in other countries, including the United States. It will also cause dismay at the WHO, throwing a shadow over the U.S. decision to re-engage the U.N. health agency.

A headline finding of the team at their Feb. 9 end-of-mission press briefing in Wuhan was to assess as “extremely unlikely” the possibility that the virus leaked from the Wuhan Institute of Virology (WIV), a specialist lab for investigating pathogens including bat coronaviruses. It determined that the “most likely pathway” had been the virus’ jump from an animal, probably a bat, via an intermediate host, to humans.

While the team ruled out the lab leak hypothesis – and even advised against further study into it – it did rule out the transmission through frozen food products theory – a PR victory for Beijing, whose officials have been raising that issue for months.

Team members also referred to “unpublished studies” from other countries suggesting that the coronavirus may have been circulating in other regions before reaching Wuhan – another proposition that the Chinese foreign ministry frequently promotes.

After last week’s press conference, the administration said it wanted to see the WHO data and cross reference it with data from the U.S. intelligence community and elsewhere. But in a statement on Saturday it went considerably further.

Noting that the Biden administration had reversed President Trump’s intention to withdraw from the WHO, National Security Advisor Jake Sullivan said that “re-engaging the WHO also means holding it to the highest standards.”

“And at this critical moment, protecting the WHO’s credibility is a paramount priority,” he said. “We have deep concerns about the way in which the early findings of the COVID-19 investigation were communicated and questions about the process used to reach them.”

“It is imperative that this report be independent, with expert findings free from intervention or alteration by the Chinese government.”

“To better understand this pandemic and prepare for the next one, China must make available its data from the earliest days of the outbreak,” Sullivan said. “Going forward, all countries, including China, should participate in a transparent and robust process for preventing and responding to health emergencies – so that the world learns as much as possible as soon as possible.”

The 14-strong WHO international team spent a month in Wuhan, half of the time quarantined in hotel rooms, collaborating with Chinese counterparts. They visited key sites including hospitals, food markets, and the WIV.

Several team members have been quoted since leaving China as saying authorities had withheld some raw data relating to early cases in Wuhan. (One member disputed this on Twitter, however, saying he had experienced “trust & openness” from Chinese counterparts, while another said her quotes in earlier reporting had been “twisted.”)

‘Spreading the political narrative that the virus originated in China’

Reacting to Sullivan’s statement a spokesperson at the Chinese Embassy in Washington said that while China welcomes the U.S. decision to return to the WHO, the agency was “an authoritative multilateral international organization in the field of health, not a funfair where one can come and go at will.”

“What the U.S. has done in recent years has severely undermined multilateral institutions, including the WHO, and gravely damaged international cooperation on COVID-19,” the spokesperson said.

“But the U.S., acting as if none of this had ever happened, is pointing fingers at other countries who have been faithfully supporting the WHO and at the WHO itself. With such a track record, how can it win the confidence of the whole world?”

“It is hoped that the U.S. will hold itself to the highest standards, take a serious, earnest, transparent and responsible attitude, shoulder its rightful responsibility, support the WHO's work with real actions and make due contribution to the international cooperation on COVID-19,” the spokesperson said. “The whole world will be looking.” 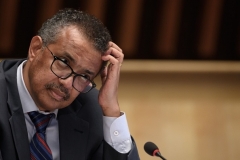 In an editorial Global Times, a Chinese Communist Party paper, accused Sullivan of “trying to manipulate public opinion into questioning” the experts’ findings.

“The U.S. has been politicizing this scientific work, presupposing and spreading the political narrative that the virus originated in China,” it said, echoing a China’s foreign ministry talking point. “Washington has strived to make the WHO's identification of the virus origins a process to justify the U.S.’ own stance.”

The CCP organ said despite pledging to respect science, the Biden administration appeared unable to reverse course from its predecessor, but “has revealed its intention to continue stigmatizing China with the COVID-19 pandemic and thus weaken China’s influence around the world.”

In Geneva on Friday, WHO Director-General Tedros Adhanom Ghebreyesus backed away from the idea that the lab theory had been thrown out entirely.

“Some questions have been raised as to whether some hypotheses have been discarded,” he said. “Having spoken with some members of the team, I wish to confirm that all hypotheses remain open and require further analysis and studies.”

But in Wuhan earlier in the week, expert team leader Peter Ben Embarek had stated, “The laboratory incident hypothesis is extremely unlikely,” adding that it was not among “the hypotheses that we will suggest for future studies.”

WHO hopes to publish a summary report from the mission this week.