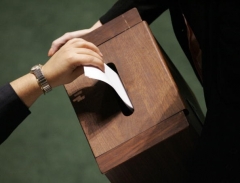 A U.N. delegate casts a ballot in the General Assembly. (File photo by Stan Honda/AFP via Getty Images)

(CNSNews.com) – Somalia, Qatar, Cameroon and Kazakhstan – undemocratic regimes with poor human rights records – all received more votes than the United States when the U.N. General Assembly in a secret ballot election on Thursday filled 18 seats on the Human Rights Council.

Of the 18 countries elected onto the Geneva-based HRC for three-year terms beginning in January, the United States received the second-lowest endorsement – 168 votes in the 193-member General Assembly (UNGA).

Only Eritrea, an authoritarian regime sanctioned by the U.S. and European Union for rights abuses, fared worse, with 144 votes.

Three years after the Trump administration withdrew from the U.N.’s top human rights body, its successor has actively re-engaged and submitted its candidacy for a seat early this year.

In a statement welcoming Thursday’s election, Secretary of State Antony Blinken thanked U.N. member-states “for affording the United States the opportunity to serve again on the Human Rights Council,” but made no reference to the vote tally.

With all five regional groups offering “closed slates” – the same number of candidates as there were vacancies for each group – the actual vote count was virtually the only unknown going into the voting.

In the ballot for three vacancies in the Western European and Others Group, to which the U.S. belongs, six of the 193 U.N. members abstained. Of the 187 members present and voting, 180 voted in favor of Finland, 180 in favor of Luxembourg, and 168 in favor of the United States.

In the other four groups, the voting was as follows:

In his statement, Blinken offered a mixed assessment of the council.

On the positive side, he said it “plays a meaningful role in protecting human rights and fundamental freedoms by documenting atrocities in order to hold wrongdoers accountable,” “focuses attention on emergencies and unfolding human rights crises, ensuring that those who are voiceless have a place to be heard,” and “provides a forum where we can have open discussions about ways we and our partners can improve.”

“At the same time,” Blinken conceded, “it also suffers from serious flaws, including disproportionate attention on Israel and the membership of several states with egregious human rights records.”

Next year’s membership in the 47-member HRC will include at least 16 countries that arguably do not meet established Western standards of democracy and human rights protection.

As reported earlier, next year will be the first time in the HRC’s 16-year history that fewer than one-third of the members meet the criteria set by Freedom House, in its annual assessment of countries’ political rights and civil liberties, to be graded as “free.”

“We left the Human Rights Council because we refused to lend our credibility to cover for the world’s worst tyrants and dictators,” former ambassador to the U.N. Nikki Haley, who led the Trump administration’s effort to reform the HRC before withdrawing in 2018, said on Thursday. “President Biden’s actions today aren’t just embarrassing; they’re dangerous.”

State Department spokesman Ned Price during a daily briefing Thursday acknowledged the council’s flaws, saying the U.S. would “press against the election of countries with egregious human rights records. It is, of course, grossly inappropriate for such countries to be represented on the Human Rights Council.

But he also reiterated the administration’s argument that it is best placed to push for improvements if it is a member.

When U.N. member-states were negotiating over the creation of the HRC in 2005, the George W. Bush administration put forward proposals aimed at shutting out abusers.

It pushed for membership to be denied to any country facing U.N. sanctions for rights abuses or terrorism, and said a candidate should obtain a two-thirds majority vote in the UNGA to win a seat.

But opponents pushed back, and the end result was that membership would be “open to all” countries. Although candidates were called upon to “uphold the highest standards in the promotion and protection of human rights,” there was no way to enforce that aspiration.

Also, it was decided that candidates could win a seat by a simple majority, while any attempt to suspend a member would require the support of two-thirds of members – making it considerably easier for a state with a dubious record to be elected to the council than for it to lose its seat. (The HRC has only ever suspended one member, Muammar Gaddafi’s Libya in 2011.)

Citing these and other concerns, the Bush then voted against the HRC’s founding resolution and chose not to run for a seat in 2006, 2007 or 2008. For a time it attended sessions as an observer, but eventually stopped doing so, and symbolically withheld U.S. funding.

The Obama administration reversed that policy, arguing – as the Biden administration is doing this year – that it could work from within to encourage reforms.

But its efforts to do so failed, as did those by the Trump administration in 2017-2018, prompting its decision to withdraw in mid-2018.