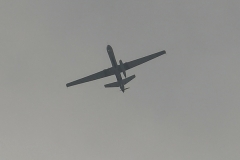 A drone flies over the airport in Kabul on August 31, 2021, the day the U.S. military engagement ended. (Photo by Aamir Qureshi/AFP via Getty Images)

(CNSNews.com) – Russian and Uzbek officials on Thursday disputed that Uzbekistan was considering allowing U.S. forces to use its territory for “over-the-horizon” surveillance and counterterror operations in Afghanistan, with Russia saying no government in the region has indicating an interest in doing so.

“Our Central Asian neighbors, allies, strategic partners, in contacts with us confirm that such ‘visits’ are unacceptable for them,” Foreign Minister Sergei Lavrov told reporters in Belarus, where he was meeting with his counterparts from former Soviet republics known collectively as the Commonwealth of Independent States.

“I repeat, our Central Asian friends tell us that they do not want such ‘visits’ from the United States or other NATO countries,” he said.

On the sidelines of the same meeting, Lavrov’s Uzbek counterpart, Abdulaziz Kamilov, also denied that a possible U.S. military deployment in his country was under discussion.

Meanwhile, the Russian state-owned Sputnik news agency quoted an Uzbek defense ministry spokesman as saying, “Uzbekistan has not received an offer to deploy U.S. counterterrorism forces on its territory, and has no plans to take such steps, since this is prohibited by our constitution and not in line with our country’s defense doctrine.”

Russian Foreign Ministry spokeswoman Maria Zakharova also addressed the issue, saying that during a visit to Moscow this week by undersecretary of state for political affairs Victoria Nuland, she was told “unequivocally that the deployment of the U.S. and NATO military infrastructure in Central Asia is categorically unacceptable for Russia.”

Zakharova said President Vladimir Putin had made “our firm position on this score” clear during his summit with President Biden in Geneva last June. That stance, she said, “remains unchanged.”

Last week, the deputy head of Russia’s Security Council, Yuri Kokov, charged that the U.S. was using counterterrorism as a pretext to regain a foothold in Central Asia, and in so doing, bring NATO infrastructure closer to Russia’s borders.

Late last month the Wall Street Journal reported that chairman of the Joint Chiefs of Staff Gen. Mark Milley had discussed with his Russian counterpart the possibility of the U.S. using Russian bases in Central Asia for “over-the-horizon” operations in Afghanistan.

The report prompted criticism from some Republicans and Democrats, and when asked about it during congressional hearings, Defense Secretary Lloyd Austin said Milley had merely been seeking clarity from the Russians on an offer “to provide assistance,” purportedly made by Putin in Geneva.

(Deputy Foreign Minister Sergey Ryabkov suggested later that Putin’s words had been misinterpreted, saying U.S. officials were either “indulging in wishful thinking, or are tending to hear in Moscow’s signals only what sounds sweet to them.”)

Russia has bases in Kyrgyzstan, Tajikistan and Kazakhstan.

Administration and Pentagon officials have said repeatedly that the U.S. will rely on “over-the-horizon” capabilities to keep terrorists in check in the post-withdrawal era.

The U.S. does not currently have military assets in any of the countries neighboring Afghanistan, however. The nearest U.S. airbase is in Qatar, a flight of some 1,500 miles if aircraft are to avoid crossing Iranian airspace. As far as shipborne options go, the waters of the Arabian Sea are 350 miles or more from the southern border of landlocked Afghanistan.

The U.S. did have a military presence in Central Asia after 9/11, using bases in support of the Afghanistan mission in Uzbekistan until 2005, and in Kyrgyzstan until 2013. (Tajikistan briefly allowed coalition forces to transit through its airspace and airfields in 2001.)

Uzbekistan’s Karshi-Khanabad airbase, located just 130 miles from that country’s border with Afghanistan, was a key strategic asset until Uzbekistan’s authoritarian ruler, Islam Karimov, expelled U.S. forces after the Bush administration called for an inquiry into a deadly 2005 crackdown on protestors.

Although the strained relationship began to improve several years later, Karimov never allowed the U.S. to return. He died in office of a stroke in 2016.

Both before and after the chaotic end to the U.S. military presence in Afghanistan, the Biden administration stepped up contacts with the Uzbeks, as more recently have delegations of U.S. lawmakers.

Austin and Secretary of State Antony Blinken both met with Kamilov in Washington in early July.

A Pentagon readout at the time said Austin and Kamilov had “agreed on the importance of further enhancing bilateral military-to-military cooperation and shared their desire to continue close collaboration on issues such as counterterrorism.”

This month Deputy Secretary of State Wendy Sherman traveled to Tashkent for talks with Mirziyoyev and his special representative for Afghanistan. According to the State Department she “underscored the importance of the United States’ strategic partnership with Uzbekistan.”

Bacon tweeted afterwards that they had discussed with Mirziyoyev “our top priorities in strengthening our foreign policy and mutual national security initiatives. We need to maintain a strong, enduring partnership between our two nations.”