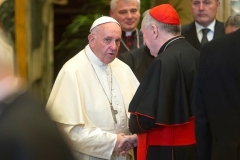 (CNSNews.com) – Weeks after Secretary of State Mike Pompeo appealed to the Vatican to speak out against religious persecution in China, the Holy See on Thursday announced a two-year extension of its controversial secret 2018 agreement with the Chinese Communist Party (CCP) dealing with how Catholic bishops serving there are appointed.

Pompeo warned last month that if the Vatican renews the deal it “endangers its moral authority.”

Defending the decision in the face of criticism from those who view the accord as a sellout of faithful “underground” Catholics, the official Vatican newspaper L’Osservatore Romano said the agreement is a “pastoral” one.

It quoted Vatican Secretary of State Cardinal Pietro Parolin as having said in a speech early this month that some “misunderstandings” had arisen about the nature of the agreement, with some attributing to it links with unrelated “political issues.”

In a veiled reference to Pompeo’s recent interventions, the article said, “some sectors of international politics have tried to analyze the work of the Holy See mainly according to a geopolitical analysis,” whereas the Vatican sees the accord as an ecclesiastical one.

The Vatican paper conceded that “there are still many situations of great suffering.”

“The Holy See is deeply aware of this, takes it well into account and does not fail to draw the attention of the Chinese government to encourage a more fruitful exercise of religious freedom,” it said. “The path is still long and not without difficulties.”

The CCP cut ties with the Vatican in 1951 and established a “patriotic” organization to supervise Chinese Catholics. It did not recognize the pope’s authority and appointed its own bishops – who were in turn not recognized by the Vatican.

But millions of Catholics remained loyal to the pope, worshiping in secret and enduring severe harassment and persecution, according to religious freedom watchdogs.

(In a prime example, Kung Pin-mei, whom Pope John Paul II secretly named cardinal while behind bars, was imprisoned for his faith for 30 years, followed by a further ten years under house arrest. He was allowed to travel to the U.S. for medical treatment in 1987, and died in 2000.)

The agreement sought by the Vatican and concluded in 2018 was a bid to resolve the issue of bishop appointments, and unify “patriotic” and “underground” Catholics.

Although the deal’s wording has never been published, it’s understood that it allows for consultation between the Holy See and the CCP on bishop nominations, with Pope Francis apparently having the final say. The Vatican also regularized the status of seven “patriotic” bishops whose appointments by Beijing it had previously not recognized.

Parolin, who led the negotiations with China, on Wednesday defended the secrecy of the agreement on the basis it was interim and “experimental.”

Speaking to reporters, he stressed again the limited nature of the accord, saying that “there are many other problems that the agreement was not intended to solve.”

In response to a question, Parolin said the agreement does not pave the way for a restoration of diplomatic ties severed seven decades ago.

In Beijing, foreign ministry spokesman Zhao Lijian said that following “friendly negotiations,” China agreed to extend the accord for another two years

“The two sides will continue to maintain close communication and consultation and advance the improvement of bilateral ties,” he said. But when asked if they were looking towards establishing diplomatic relations in the future Zhao did not answer directly.

Critics of the CCP say religious persecution has only become worse since the deal was first announced, with churches closed, crosses removed, and congregations ordered to display portraits of President Xi Jinping (in addition to the massive abuses targeting minority Muslim Uighurs in Xinjiang province, Falun Gong adherents, and others).

Pompeo in an essay published last month gave a bleak assessment of the accord.

“Two years on, it’s clear that the Sino-Vatican agreement has not shielded Catholics from the Party’s depredations, to say nothing of the Party’s horrific treatment of Christians, Tibetan Buddhists, Falun Gong devotees, and other religious believers,” he wrote.

“What the Church teaches the world about religious freedom and solidarity should now be forcefully and persistently conveyed by the Vatican in the face of the Chinese Communist Party’s relentless efforts to bend all religious communities to the will of the Party and its totalitarian program.”

Pompeo then took up the matter directly with Vatican officials during a September 30 visit, and said in a speech that although governments were at times obliged to make compromises, “the Church is in a different position. Earthly considerations shouldn’t discourage principled stances based on eternal truths.”

“Religious leaders should understand that being salt and light must often mean exercising a bold moral witness,” he said.

Cardinal Zen: We Are Witnessing 'Murder of the Church in China by Those Who Should Protect' Her (Jan. 9, 2020)