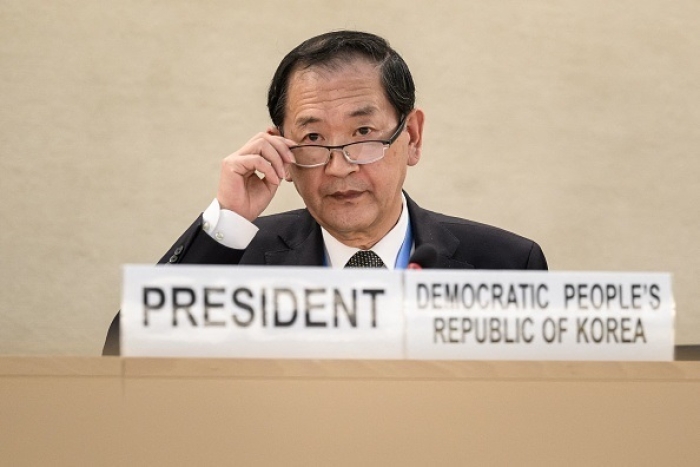 North Korea’s delegate to the Conference of Disarmament, Han Tae Song, presides over the session in Geneva on Thursday. (Photo by Fabrice Coffrini/AFP via Getty Images)

(CNSNews.com) – North Korea’s assumption of the presidency of the world’s only multilateral negotiating forum on disarmament prompted verbal protests on Thursday by mostly Western nations, but not the boycott or walkout that some non-governmental critics had called for.

North Korean ambassador Han Tae-Song took the helm of the 65-nation Conference on Disarmament (CD), a U.N.-linked body that holds three sessions a year in Geneva, in line with longstanding practice that rotates the chair through the membership in alphabetical order.

Han’s three-week presidency comes at a time when the regime he represents continues to violate numerous U.N. Security Council resolutions by launching ballistic missiles, including intercontinental ballistic missiles, capable of carrying nuclear warheads. The U.S. and other governments also assess that it is preparing to carry out a nuclear test, for the first time in five years.

Earlier dozens of NGOs from around the world, led by the Geneva-based UN Watch, urged democracies to stage walkouts in protest.

Although no walkout took place on Thursday, Australian Ambassador Amanda Gorely in a statement on behalf of almost 50 countries said while they had decided to take part to advance discussions on an “important agenda,” their participation should not be construed as “tacit consent” for Pyongyang’s actions, “which continue to seriously undermine the very value of the CD.”

Gorely went on to list some of the missile launches undertaken by Kim Jong Un’s regime since the start of the year, expressing concern about its “continued advancement of weapons of mass destruction and ballistic missile capabilities, including reports that it is preparing to conduct its seventh nuclear test.”

She called on North Korea to “abandon all nuclear weapons and existing nuclear programs, as well as any other WMD and ballistic missiles programs, in a complete, verifiable and irreversible manner.”

The G7 statement also expressed regret that the Security Council last week failed to adopt a resolution condemning the latest missile launches. Russia and China vetoed the U.S.-drafted resolution – the first time in 15 years the council did not unanimously adopt a resolution in response to Pyongyang’s WMD-related provocations.

The statement delivered by France said E.U. member-state would downgrade their representation, which is typically at ambassador level, during the North Korean presidency.

The delegates of China, Russia, Iran, Pakistan, India, and Nigeria congratulated Han on North Korea’s presidency of the forum.

Han, speaking in his national capacity, said the “negative” statements made by certain delegations raised questions about their sincerity and desire to contribute to the CD’s work.

He said no state had the right to criticize or interfere in the national defense policy of another state.

North Korea was still at war with the United States, and was under threat of nuclear attack by the U.S., he said. It was therefore carrying out testing as part of its plan to strengthen the nation’s capacity to protect itself.

(The 1950-1953 Korean War ended with an armistice rather than a peace treaty, so the sides remain technically at war.)

In an earlier statement in his capacity as president, Han said North Korea was “committed to contributing to global peace and disarmament and attaches importance to the work of the conference.”

“North Korea has been far from a responsible actor when it comes to matters of nonproliferation,” State Department spokesman Ned Price said during a daily press briefing on Thursday.

Asked if North Korea’s presidency of the CD raised questions “about the utility of this organization,” Price replied, “it certainly calls that into question when you have a regime like the DPRK in a senior leadership post, a regime that has done as much as any other government around the world to erode the nonproliferation norm.”

As for whether the administration was “reconsidering its membership” in the forum, however, Price said he had no “announcement to make at the moment.”

During the Trump administration, the U.S. ambassador in 2019 walked out of the CD chamber in a symbolic show of protest when Venezuela’s Maduro regime assumed the presidency.

The Obama administration in 2013 chose not to send its ambassador to the CD when Iran was president, and in 2011 Canada boycotted when North Korea chaired the forum.

Established in 1979, the CD is the body that negotiated agreements including the 1993 Chemical Weapons Convention and 1996 Comprehensive Nuclear Test-Ban Treaty.