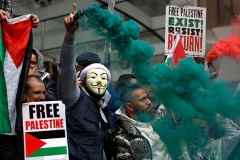 Palestinian flags, smoke flares and placards featured at a demonstration in London on Saturday. (Photo by Tolga Akmen/AFP via Getty Images)

(CNSNews.com) –  From London to Bonn to Toronto, mass rallies condemning Israel over the conflict with Hamas in Gaza have been marred by incidents of violence and vitriol, with Jews in the firing line.

Police in London arrested four people on Sunday after a convoy of vehicles emblazoned with Palestinian symbols was filmed while driving through a part of the capital with a sizeable Jewish community, with some heard yelling abuse over a public address system.

“F*** the Jews, rape their daughters,” the male voice was heard shouting. “We have to send a message.”  Video clips of the incident were posted on social media.

Scotland Yard said in a statement that after police received reports about the incident, the vehicle in question was tracked as it drove through a suburb about 15 miles away.

“The police helicopter was deployed and officers stopped the car,” it said. “Four men were arrested on suspicion of racially aggravated public order offences.”

“This behavior was utterly shocking and will not be tolerated,” said Superintendent Jo Edwards. “I understand that this would have caused considerable concern within the community and we have arranged extra patrols in the St. John’s Wood and Golders Green areas this evening.”

The incident prompted strong condemnation from politicians including Prime Minister Boris Johnson, who expressed his support for “Britain’s Jews who should not have to endure the type of shameful racism we have seen today.”

“This, on the streets of London is deeply disturbing,” said housing and communities minister Robert Jenrick. “Vile, criminal hatred like this must not be tolerated.”

“Utterly disgusting,” tweeted Keir Starmer, leader of the opposition Labour Party. “Antisemitism, misogyny and hate have no place on our streets or in our society. There must be consequences.”

“We have seen increasingly serious ‘pro-Palestinian’ anti-Semitic attacks and anti-Jewish intimidation across London on Sunday,” a spokesman for the Community Security Trust, a U.K. Jewish charitable group, told Jewish News.

“This comes after three anti-Israel demonstrations in a week, each featuring swastikas and jihadi anti-Jewish chants, all unchallenged as usual by the supposed ‘anti-racist’ left.”

Protests in recent days in several German cities, including the former capital Bonn, witnessed the burning of Israeli flags and anti-Semitic slogans and banners. Participants included left-wingers and Islamists.

In one small city near Dortmund, several hundred people chanted anti-Jewish slogans as they marched to a synagogue, German media reported. In video clips, protesters could be seen waving Turkish and Algerian flags, in addition to Palestinian ones, as police were deployed to protect the synagogue.

Media reports referred to protestors in some of the rallies shouting anti-Jewish insults and calling for the bombing of Tel Aviv.

One rally in Berlin, declared prohibited because of violations of coronavirus restrictions, turned violent, with demonstrators hurling bottles and other objects and police using pepper spray in a bid to disperse them. Police reported 59 arrests and said dozens of officers had sustained injuries.

The Central Council of Jews in Germany reported having received “a flood of the worst anti-Semitic abuse,” and Israel’s ambassador to Germany, Jeremy Issacharoff, expressed concern about the tone of the protests, telling Bild some “unbelievable anti-Semitic statements” had been made at rallies.

Interior Minister Horst Seehofer said Sunday the government would “not tolerate the burning of Israeli flags on German soil and attacks on Jewish facilities. Jews in our country must never again live in fear.”

“Anyone who spreads anti-Semitic hatred will feel the full force of the law,” he warned.

A Sunday paper in Frankfurt quoted the head of the Central Council of Muslims in Germany, Aiman Mazyek, as saying, “anyone who attacks synagogues and Jews under the pretext of criticizing Israel has forfeited any right to solidarity.”

In a northern neighborhood of Paris, thousands of protesters rallied in defiance of a police prohibition, put in place due to concerns the event could turn violent, in a rerun of past pro-Palestinian demonstrations in the French capital.

Both Germany and France have large Muslim and Jewish communities. 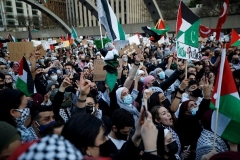 Some 5,000 pro-Palestinian protestors rallied in downtown Toronto on Saturday. (Photo by Cole Burston/AFP via Getty Images)

In downtown Toronto 5,000 protesters – according to police estimates – turned up for a rally despite an Ontario-wide coronavirus stay-at-home order, recently extended until June 2.

A small group of pro-Israel demonstrators had to be escorted from the area, and local media reported on several incidents of harassment directed at those supporting Israel, including a report of a young Jewish woman being assaulted.

Video clips posted on social media showed a middle-aged man being assaulted with sticks by several attackers, some of whom wore black and white keffiyehs popular among pro-Palestinian protestors.

The Toronto Police Service said it was investigating the alleged assault caught on video. It also said officers had arrested two men at the rally, one on assault charges and another on charges of bringing a weapon to a public event.

“Any violence against our city’s Jewish community or members of any other community in Toronto is absolutely unacceptable,” said Toronto Mayor John Tory, adding that he has asked the police chief to keep him informed about the investigation into the recorded assault “and any other documented examples of unacceptable violence and hatred.”

“Everyone has the right to assemble peacefully and express themselves freely in Canada – but we cannot and will not tolerate antisemitism, Islamophobia, or hate of any kind,” Prime Minister Justin Trudeau tweeted on Sunday evening.

“We strongly condemn the despicable rhetoric and violence we saw on display in some protests this weekend.”