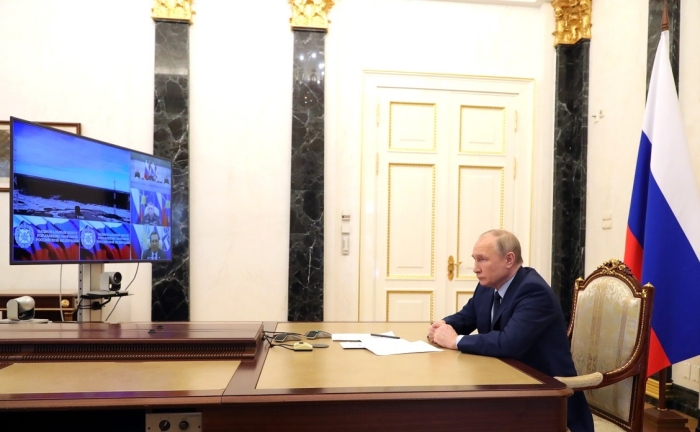 (CNSNews.com) – In early March, the Pentagon postponed a long-planned ICBM test to ensure the launch of the 1970s-era projectile was not misinterpreted by Russia and “to demonstrate that we are a responsible nuclear power.”

Observing the test launch of a newly-developed Russian ICBM on Wednesday, President Vladimir Putin had a message of his own, calling it “a wakeup call for those who are trying to threaten our country in the frenzy of rabid, aggressive rhetoric.”

The Pentagon played down the significance of the launch, calling it routine, unthreatening, and confirming that the U.S. had been advised beforehand in line with the 2010 New START Treaty. The treaty requires notification of the launch of a nuclear-capable intercontinental or submarine-launched ballistic missile at least 24 hours in advance of the launch window.

“Such testing is routine and was not a surprise,” said Pentagon press secretary John Kirby. “We did not deem the test to be a threat to the United States or its allies.”

Russia’s defense ministry said the Sarmat ICBM, with “inert” (non-explosive) warheads, had been launched Wednesday afternoon local time from the Plesetsk spaceport about 500 miles north of Moscow and landed in the designated target range in Russia’s far eastern Kamchatka peninsula (about 3,600 miles away.) 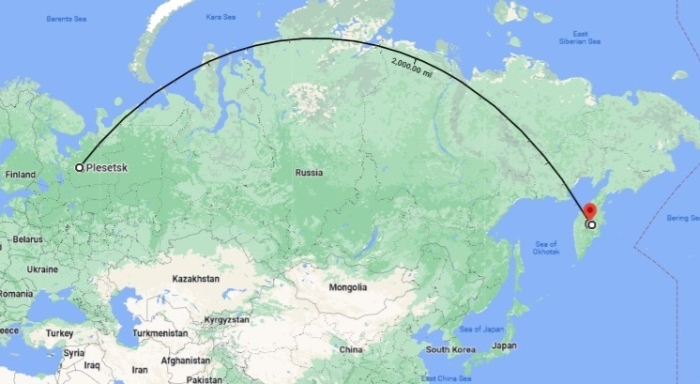 The Sarmat ICBM was launched from a spaceport about 500 miles north of Moscow and landed in a target range in the far eastern Kamchatka peninsula, about 3,600 miles away. (Google Maps)

“The launch’s tasks were achieved in full,” it said. “The designated characteristics were confirmed at all the stages of its flight.”

After watching the launch via video conference, Putin told Defense Minister Sergey Shoigu and military chiefs, “This is a big, momentous event in the development of advanced weapons systems for the Russian Army.”

The Kremlin quoted him as saying the Sarmat “has the highest tactical and technical characteristics and is capable of overcoming all modern means of anti-missile defense.”

“It has no analogues in the world and will not have any for a long time to come,” Putin said.

“This truly unique weapon will strengthen the combat potential of our Armed Forces, reliably ensuring Russia’s security against external threats, and will be a wakeup call for those who are trying to threaten our country in the frenzy of rabid, aggressive rhetoric.”

The defense ministry said the new weapon will enter service with Russia’s strategic missile forces when testing is complete. It has previously said that would occur by year’s end.

‘Bear in mind the risk of miscalculation’

The silo-launched Sarmat (sometimes called Satan II by NATO) was among an array of advanced new weaponry under development, announced by Putin in a 2018 speech, in response to what he called “unfriendly steps” by the U.S. such as deploying missile defenses in Europe.

It was described at the time as a heavy ICBM, capable of achieving hypersonic speeds and of outsmarting advanced missile defense systems.

A year later, Putin warned that the new weapons under development could threaten both the U.S. and Europe. In a sometimes belligerent state of the nation speech, he asked whether Americans could “count,” and advised the U.S. to “calculate the range and speed of our future arms systems” before making decisions threatening to Russia.

The Minuteman III first went into service in 1970. It is due to be replaced around the late 2020s by a next-generation silo-launched ICBM known as LGM-35A Sentinel, being developed by Northrop Grumman.

Kirby said at the time the decision by Defense Secretary Gen. Lloyd Austin was not taken lightly.

“We recognize at this moment of tension how critical it is that both the United States and Russia bear in mind the risk of miscalculation, and take steps to reduce those risks.”

He also said the postponement would in no way affect the U.S. nuclear deterrence.

Asked Wednesday if there were any plans now to reschedule the postponed Minuteman III test, White House Press Secretary Jen Psaki said only, “that's not something we would preview.”

The last Minuteman III test took place in August 2021. The unarmed ICBM was launched from the Vandenberg Space Force Base in southern California, and the test reentry vehicle landed about 4,160 miles downrange, near Kwajalein Atoll in the Marshall Islands. 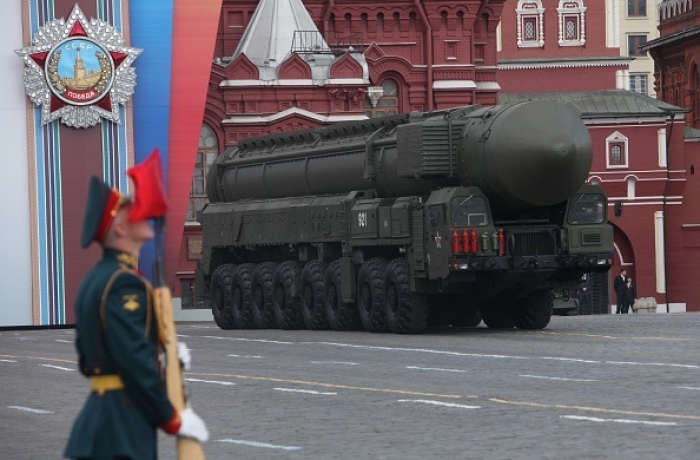 The Russian military displays one of its older ICBMs, the Topol-M, at a previous Victory Day parade in Moscow. (Photo by Konstantin Zavrazhin/Getty Images)