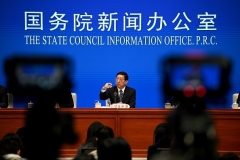 (Update: White House press secretary Jen Psaki said Thursday China’s rejection of the WHO proposal to further probe Wuhan labs was “irresponsible and, frankly, dangerous,” adding that the U.S. would continue to work with international partners to put pressure on Beijing over the issue.)

(CNSNews.com) – The Chinese government on Thursday rejected World Health Organization plans to include investigations of laboratories in Wuhan in the next phase of the probe into the origins of the coronavirus outbreak.

China could not accept the proposed plan, since it has been compromised by political manipulation and disrespect for scientific facts, Zeng Yixin, the vice minister of the National Health Commission, told a briefing arranged by the information office of the communist government’s cabinet, the State Council.

Last Friday, WHO Director-General Tedros Adhanom Ghebreyesus announced that the “second phase” of the virus origin investigation would, among other things, include “audits of relevant laboratories and research institutions operating in the area of the initial human cases identified in December 2019.”

The aim would be to examine – and discount if disproven – the hypothesis that the coronavirus causing COVID-19 may have leaked accidentally from a lab in the city where the disease first emerged.

But Zeng said the WHO proposal to explore the “lab leak” theory showed disrespect to common sense and arrogance to science.

He said that during the first phase of the origin study, China had cooperated fully with the WHO-convened international team of experts who visited Wuhan earlier this year, allowing them to go where they wished and speak to whomever they wished.

At the end of its mission, the team said in a report that the theory of a laboratory accident was “extremely unlikely” and that further investigation into it was not recommended.

By contrast, it recommended further study into three other hypotheses – that the virus jumped directly from an animal such as a bat to humans; that it jumped from bats to humans via an intermediate host such as a pangolin; that transmission occurred through trade in frozen food products.

Since that report was issued, China has pointed to it to back up its insistence that the “lab leak” theory has been categorically rejected.

But Tedros said last week the expert team’s “extremely unlikely” assessment had been “premature,” adding that lab accidents can and do happen.

In addition to the lab focus, the WHO’s proposed work plan for the second phase includes:

--studies of animal markets in the Wuhan area

--studies prioritizing geographic areas with the earliest indication of circulation of the coronavirus.

Zeng said he had been “very shocked” to read that the WHO proposal included further examination of the lab-leak theory. Chinese experts had offered the U.N. agency suggestions for “improving” its plan, he said.

“We hope the WHO can carefully consider the advice by Chinese scientists, take investigating the origin of the COVID-19 virus as a scientific question free from political interference, and proactively and properly conduct sustained investigations into the origin of the virus in various countries across the world.”

Also taking part in the State Council briefing was Yuan Zhiming, a WIV researcher, who declared that, “Since the laboratory began operating in 2018, no laboratory leaks or human infections have ever occurred.”

Yuan also denied claims that three WIV staffers had contracted the respiratory disease – which the WHO would later name COVID-19 – in November 2019.

Last January, the Trump State Department said in a statement that WIV should be more closely examined as part of investigations into the origins of the outbreak. It said the U.S. government had “reason to believe that several researchers inside the WIV became sick in autumn 2019, before the first identified case of the outbreak, with symptoms consistent with both COVID-19 and common seasonal illnesses.”

Then in May, the Wall Street Journal reported that according to “a previously undisclosed U.S. intelligence report,” three researchers at WIV had fallen ill with COVID-like symptoms in November 2019.

Yuan said those making such allegations never provide the names of the researchers who supposedly fell ill.

“The claim has been created out of thin air.”

Liang Wannian, the head of the team of Chinese experts involved in the WHO-convened “first phase” mission, told the briefing that Chinese researchers believe there should be greater focus now on P4 labs in other countries that have not been visited by international experts.

Chinese foreign ministry officials have for months been arguing that the U.S. Army Medical Research Institute of Infectious Diseases in Fort Detrick, Maryland should be opened to outside inspection, insinuating that a temporary suspension of operations there in the summer of 2019 was linked to the coronavirus outbreak.

The Chinese Communist Party daily Global Times is promoting the idea that the US Army biolab at Fort Detrick, Md. is linked to the coronavirus outbreak. (Image: Global Times)

One of those officials, Zhao Lijian, told a ministry briefing on Wednesday that more than five million Chinese citizens had signed an open letter, published by the Chinese Communist Party paper Global Times at the weekend, calling on WHO to investigate Fort Detrick.

“The increasing endorsement reflects the Chinese people’s aspiration and their anger in the political manipulation by some in the U.S.,” Zhao said. “A probe into Fort Detrick is long overdue, but the U.S. has not done it yet.”