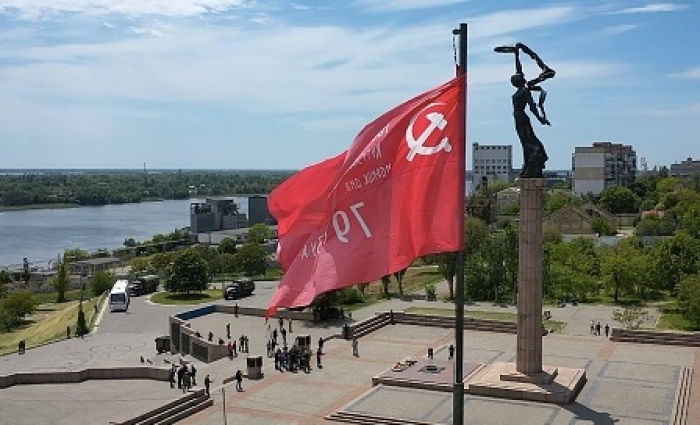 A replica of the Soviet banner of victory – the official symbol of the victory of the Soviet Union over the Nazis in World War II – flies over the Russian-occupied Ukrainian city of Kherson in May. (Photo by Andrey Borodulin/AFP via Getty Images)

Citing U.S. intelligence and reports in the public domain, he told reporters at the White House that Russia was “beginning to roll out a version of what you could call an annexation playbook, very similar to the one we saw in 2014,” when it took Crimea.

“Then, Russia will use those sham referenda as a basis to try to claim annexation of sovereign Ukrainian territory.”

Kirby said Russia was eyeing all of the Donetsk and Luhansk regions – President Vladimir Putin recognized the “independence” of the separatist so-called people’s republics there days before the invasion began – as well as Kherson and Zaporizhzhia, adjacent areas in the south of the country, parts of which were captured by Russian troops early on.

“Russia’s attempting to set the conditions on the ground by seeking to establish branches of Russian banks, to establish the ruble as the default currency in these areas, and to sabotage civilian Internet access.”

Kirby said while dates for the referendums have not been disclosed, proxies in the area say they will occur later this year, possibly as early as September, when Russia holds regional and gubernatorial elections.

“At the start of the year, Russia told the world that it was not planning to invade Ukraine,” Kirby recalled.

“And now we’re expected to believe that they’re not going to plan to annex Ukrainian territory.”

Kirby said the U.S. would not allow any such annexation by force to go “unchallenged or unpunished,” and that should Russia go ahead with the plans, “we’re going to respond swiftly and severely, and in lockstep with our allies and partners.”

“Russia will face additional sanctions and become even more of a global pariah than it is now,” he said. “We will never recognize any purportedly annexed territory as belonging to Russia.”

It’s not the first time the administration has warned of alleged Russian plans to make permanent its control over areas of territory seized by its troops in Ukraine.

In May, the U.S. ambassador to the Organization for Security and Cooperation in Europe, Michael Carpenter¸ told the OSCE’s permanent council in Vienna that Russia was working to bring parts of Ukraine it has seized “into its orbit.”

He pointed to the changing of place names to Russian ones, the imposed use of the ruble, schools being compelled to adopt Russian curricula, among other things.

Putin in 2014 annexed Crimea after a referendum in which a majority of residents supported the strategic Ukrainian peninsula’s incorporation into the Russian Federation. Most of the international community regards Crimea as sovereign Ukrainian territory.

Last month, TASS reported that a senior figure in the Russian-installed administration in Kherson said he believed the area would “follow in Crimea’s footsteps” in seeking to become part of Russia.

In Kherson, reports periodically surface indicating Ukrainian resistance to attempts by the Russian proxy administration to tighten its control over the area.

On Tuesday, Russia’s Komsomolskaya Pravda reported that a man had been detained while trying to torch a building in Kherson where residents lodge applications for Russian citizenship.

The paper cited a senior Russian official as saying that about 70 percent of the inhabitants of Kherson and nearby Zaporizhzhia want to obtain Russian passports, and that the first passports had been issued in Kherson in mid June.

In his remarks at the White House, Kirby said that Russian security services were targeting Ukrainians in the occupied areas who they believe are involved in “resistance activities.”

US Ambassador: Russia Working to Bring Newly-Occupied Ukrainian Areas ‘Into Its Orbit’ (May 13, 2022)

Lavrov Hints Russia Will Retain Parts of Ukraine After Referendums – ‘The Manifestation of Democracy’ (Apr. 20, 2022)