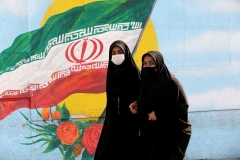 The fundamentalist Shi'ite regime in Tehran enforces the mandatory wearing of the hijab for all Iranian women. (Photo by Atta Kenare/AFP via Getty Images)

(CNSNews.com) – Three weeks after United Nations member-states voted the Iranian regime onto the United Nations’ top gender equality body, attempts to determine which democracies supported its candidacy in the secret ballot continue, but most are citing protocol and declining to say how they voted.

Canada was a noted exception, with its ambassador to the U.N. Bob Rae confirming early on that Canada did not vote for Iran to get a seat on the Commission on the Status of Women (CSW) in the April 20 vote in New York.

The U.N. describes the CSW as “the world’s leading intergovernmental body exclusively dedicated to the promotion of gender equality and the empowerment of women.”

Iran, a regime that imprisons women for breaching mandatory hijab-wearing regulations and whose penal code dictates that a woman’s testimony in a court of law holds half the weight of a man’s, is ranked near the bottom of gender equality surveys (in 150th place out of 156 countries assessed in the World Economic Forum’s latest “Global Gender Gap” report).

The notion that any liberal democracy would consider Iran to be an appropriate candidate for the CSW has astounded Iranian women’s rights advocates, but that appears to have been the case for at least several of the almost two dozen democracies that are members of the U.N. body tasked to fill the CSW vacancies – the Economic and Social Council (ECOSOC).

ECOSOC has 54 members, of whom 22 could be described as free democracies – 15 in the West (Australia, Austria, Britain, Bulgaria, Canada, Finland, France, Germany, Latvia, Luxembourg, Netherlands, Norway, Portugal, Switzerland, and the United States), and another seven from elsewhere in the world (Argentina, Brazil, Jamaica, Japan, Panama, Solomon Islands, and South Korea).

In the CSW vote, 53 of the 54 ECOSOC members cast ballots, and Iran received 43 votes.

Critics saw Iran’s election onto the CSW is a reflection of broader problems with the United Nations.

“This is the latest example of how the U.N. has become a corrupted international organization often rigged against U.S. interests in favor of the most repressive and dangerous regimes in the world,” said Richard Goldberg, a senior advisor at the Foundation for Defense of Democracies (FDD) and former National Security Council official.

“Women’s rights activists in Iran like Nasrin Sotoudeh sit in jail while their oppressors get elected to the world’s premier women’s rights body,” he said. “We deserve to know which fellow democracies voted for this sham.”

CNSNews.com has sent queries to the U.N. missions and/or foreign ministries of every democracy on ECOSOC, asking if they would reveal how they voted. As of Monday, none has done so.

That includes the United States, whose State Department spokesman Ned Price earlier called it “a private vote.” He did also make the point that the U.S. delegate had requested a recorded vote on Iran’s candidacy – rather than allow it to get the seat “by acclamation,” a common occurrence in U.N. elections.

Price implied that the U.S. was unhappy with the outcome, but appeared reluctant to say directly.

An Australian spokesperson indicated on background that voting in CSW elections is by secret ballot and Australia, like other member-states, does not publicly disclose how it votes.

“The U.K. has a longstanding position not to reveal how we vote in closed ballots at the U.N.,” said spokesperson Mungo Woodifield. “However, our position with respect to Iran is well known – we have serious, longstanding concerns about its human rights record.”

“As a general rule Austria would not comment on its voting behavior in secret ballots,” said Johannes Aigner, a foreign ministry spokesperson. “Having said that Austria deems it necessary and useful to keep discussing women’s rights, especially with countries where the status of women has yet to be lifted. Experience teaches us that it’s better to talk to countries rather than just talking about them.”

“Voting in connection with elections and candidacies in the UN is not public,” said the mission’s press counsellor, Astrid Sehl. “This is in line with the procedural rule on secret ballot, and established practice among U.N. member states.”

“Iran undoubtedly has major challenges when it comes to women's rights and equality. Norway has clearly expressed its concerns about this, both in the U.N. and in our bilateral dialogue with the Iranian authorities,” Sehl said. “Now that Iran has been elected to the Women's Commission, we will actively use the opportunity to set clear expectations and to hold them accountable.”