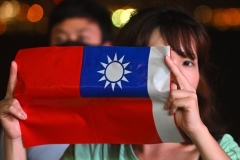 (CNSNews.com) – When the White House COVID-19 response team posted a tweet earlier this week highlighting the number of countries that have received vaccines from the U.S., staffers in an “honest mistake” included a flag of Taiwan, White House Press Secretary Jen Psaki said Thursday.

“When we recognized the mistake, we removed the tweet,” she told a press briefing, saying the “mistake” should “not in any way be viewed as a shift in official U.S. policy.”

Reacting to the removal of the tweet, the Formosan Association for Public Affairs – a Washington-based Taiwanese-American lobby – tweeted, “Grateful to the White House for their donations and proper (if temporary) references to Taiwan with flag and name.”

“These displays should remain permanent – there is nothing shameful or improper about using accurate language or imagery,” FAPA said.

“This is the flag of Taiwan,” tweeted Sen. Ted Cruz (R-Texas), inserting a small graphic of the red, blue and white flag. “The Biden White House is terrified to acknowledge that fact, for fear of offending communist dictator Xi. Biden is weak on China. And appeasement never works.”

Although the since-deleted post did not use the word “countries,” the inclusion of Taiwan’s national flag could have been seen as suggesting that Taiwan was on a par with other nations listed. That flies in the face of Beijing’s “one China” policy, and the carefully-calibrated U.S. policy towards the Taiwan Strait dispute.

The tweet began:  The President committed that the U.S. would be an arsenal of vaccines for the world.”

It then named 12 countries that have received coronavirus vaccines from among 40 million doses shipped by the U.S. since the beginning of June. They are South Korea, Mexico, Canada, Brazil, Taiwan, Honduras, Colombia, Pakistan, Peru, Ecuador, Malaysia and Bangladesh.

Below was a graphic including the recipient countries’ national flags.

The now-deleted tweet from the White House COVID-19 response team included a reference to Taiwan and a graphic of its national flag. (Image: Twitter)

Before the White House deleted it, the message won the praise of Taiwanese President Tsai Ing-wen, Taiwan’s de facto ambassador to Washington, Bi-khim Hsiao, and the country’s opposition KMT party.

“Thank you to the U.S. for your generosity,” commented Tsai. Together, we will beat this pandemic.”

“Grateful for U.S. leadership and generosity in helping the world access vaccines,” tweeted Hsiao. “We’re in the fight against COVID-19 together, and we are stronger together.”

The KMT tweeted its thanks too, saying, “A friend in need is a friend indeed. Great to see that beautiful #RepublicOfChina flag! Thanks #USA!”

Those posts remain live, but the White House tweet they refer to is “unavailable.”

‘We do very much support Taiwan’s dignity’

China regards Taiwan as a renegade province whose return – by force if necessary – is inevitable. The U.S. has full diplomatic relations with Beijing, not Taipei, but is also committed, through the 1979 Taiwan Relations Act, to protect the island from unprovoked aggression and to provide it with military aid.

The Chinese government is deeply sensitive about the issue, with its officials and diplomats quick to respond forcefully to any action or statement taken by governments and even private businesses seen to ascribe statehood or sovereignty to the self-governing democracy.

(In 2018 Beijing demanded that U.S. and other airlines amend online customer information that portrayed Taiwan as a separate country. The Trump White House called the demand “Orwellian nonsense,” but the airlines complied.)

In a speech last week marking the centenary of the Chinese Communist Party, President Xi Jinping said, “resolving the Taiwan question and realizing China’s complete reunification is a historic mission and unshakeable commitment of the Communist Party of China.”

“We must take resolute action to utterly defeat any attempt towards Taiwan independence,” Xi said. “No one should underestimate the resolve, the will, and the ability of the Chinese people to defend their national sovereignty and territorial integrity.”

On Tuesday, White House coordinator for the Indo-Pacific Kurt Campbell laid out what he called the “dangerous balance” the U.S. has to strike regarding Taiwan.

“We support a strong unofficial relationship with Taiwan,” he told an Asia Society event. “We do not support Taiwan independence. We fully recognize and understand the sensitivities involved here.”

Campbell said the U.S. believes that Taiwan has the right to live in peace.

“We do very much support Taiwan’s dignity, its remarkable achievements as we go forward,” he said. “And we’ve tried to send a very clear message of deterrence across the Taiwan Strait.”

Responding to Campbell’s remarks, Taiwanese foreign ministry spokeswoman Joanne Ou thanked the U.S. for its support and provision of vaccines but also stressed that Taiwan “is a sovereign nation, not part of the [People’s Republic of China]. That is a fact, as well as the ‘status quo.’”

The CCP organ China Daily said in an editorial Campbell’s assertion that the U.S. does not support Taiwan independence was “the first time the Biden administration has clarified its stance on Taiwan. [It] relieves Beijing of an acute concern, and potentially removes a key obstacle to meaningful communication between the two sides.”

As of July 8, 12.1 percent of Taiwan’s 23 million people had received at least one dose of a coronavirus vaccine, with the vaccines coming from the U.S., Japan, directly from vaccine manufacturers, or via COVAX, the global vaccine-sharing initiative.