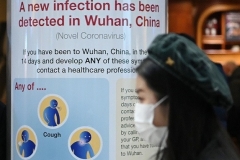 (CNSNews.com) – Almost a year after a man in Wuhan became the first person known to have symptoms of the as-yet unknown illness later named COVID-19, an international team of experts has been convened, and the World Health Organization hopes it will be deployed in the Chinese outbreak city “as soon as possible.”

Chinese scientists are carrying out “phase one” studies in Wuhan on the animal-human origins of the coronavirus. The international team, mandated by a WHO health assembly resolution back in May, now has its “terms of reference” finalized and is awaiting the green light from China to carry out the field trip.

“We need to be able to have the international team join our Chinese colleagues and go to the ground and look at the results and the outcomes of those phase one studies, and verify these data on the ground,” said Michael Ryan, director of the WHO emergencies program. “This is extremely important,” he said. “And we would like to have that team deployed as soon as possible.”

Ryan said the Chinese government has assured the WHO that the trip “will be facilitated, and as soon as possible, in order that the international community can be reassured of the quality of the science.”

Asked in Beijing on Tuesday when the team would be able to visit, foreign ministry spokesman Zhao Lijian replied, “if there is any information, we will release it in due course.”

Zhao said that while China was cooperating, the hunt for the origin was “an ongoing process that may involve many countries and places. We hope all relevant countries will adopt a positive attitude and cooperate with WHO like China does.”

Zhao is the official who used his Twitter feed last March to promote a conspiracy theory accusing the U.S. Army of introducing the coronavirus to Wuhan in the fall of 2019.

When WHO member-states passed the resolution on May 19 directing an inquiry into the virus’ origin, WHO director-general Tedros Adhanom Ghebreyesus said it would begin its work “at the earliest time possible.”

The process has been slow one, however, prompting U.S. and others to express frustration.

On the day the resolution was adopted, the global COVID-19 death toll stood at around 319,000 and the number of confirmed cases at below five million. Today the number of deaths exceeds 1.4 million, with almost 60 million cases reported. 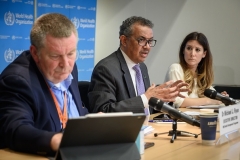 The WHO officials were asked about concerns raised by some member-states about transparency and “the amount of time it’s taking to send the team to China.”

Ryan stressed that WHO was holding “very open and transparent dialogue with our member-states every single week.”

He acknowledged that “one member-state did express some concerns regarding the phase one studies, and ensuring that they completed as quickly as possible. We reassured that member-state that that would happen.”

The team named by WHO comprises ten scientists, one each from Australia, Britain, Denmark, Germany, Japan, Netherlands, Qatar, Russia, the United States, and Vietnam. The member from the U.S. is Dr. Peter Daszak, an emerging disease and pandemic expert whose research has included identifying the bat origins of SARS.

According to a paper by two dozen Chinese experts, published in The Lancet last January, a first patient in Wuhan was found to be experiencing symptoms on December 1 last year, although subsequent Chinese government data indicated that a first case may date back as early as November 17.

Ryan agreed with a questioner about the importance of trying to identify “patient zero,” but did not downplay the difficulties of doing so.

The wet market in Wuhan that was linked to many but not all of the earliest known cases had likely been a “point of amplification,” although it was still unclear whether the source there was human or animal, or environmental contamination.

Exactly how the virus breached the animal-human barrier “may have been a single event, it may have been multiple events. Those events may have occurred in one particular time, or over a range of different times,” Ryan said.

“The natural history of these things is at least one ‘patient zero,’ probably more. The DG [Tedros] has always said, and was very, very strong on this from the very beginning, that we need to start where we found the first cases, and that is in Wuhan in China. And then we need to follow the evidence after that, wherever that leads.”

President Trump has accused the WHO of being overly complaint towards China, and his administration gave the U.N. agency notice that it was withdrawing. Former Vice President Joe Biden has pledged to reverse that move as president.

US Scolds WHO Over Sluggish Approach to Investigating Origins of Coronavirus in China (Nov. 12, 2020)