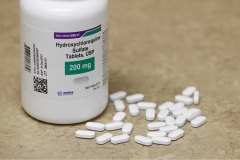 President Trump said on May 18 that he has been was taking hydroxychloroquine as a preventative measure against COVID-19. (Photo by George Frey/AFP via Getty Images)

(Update: The Lancet on Thursday retracted the study that prompted the WHO to suspend its hydroxychloroquine trial. The journal said the study authors were “unable to complete an independent audit of the data underpinning their analysis” and as a result they “can no longer vouch for the veracity of the primary data sources.”)

(CNSNews.com) – The World Health Organization announced Wednesday that it is resuming a global trial of the malaria drug hydroxychloroquine as a potential COVID-19 treatment, which it suspended last week after a leading medical journal published a study raising concerns about its safety and efficacy.

Hydroxychloroquine (HCQ) is the drug which President Trump told reporters on May 18 he was taking as a coronavirus preventive measure, attracting criticism and ridicule from media commentators, late-night television hosts, and some Democrats.

The WHO reversal came after its “data safety and monitoring committee” found no reason not to continue the HCQ clinical trial, “on the basis of the available mortality data,” Director-General Tedros Adhanom told a briefing in Geneva.

The medical journal concerned, meanwhile, issued an “expression of concern” about the quality of the study it published earlier.

The Lancet said that pending the outcome of “an independent audit of the provenance and validity of the data” now underway, “we are issuing an Expression of Concern to alert readers to the fact that serious scientific questions have been brought to our attention. We will update this notice as soon as we have further information.”

The observational study originally published in The Lancet on May 22 concluded that HCQ was not only ineffective in improving the condition of COVID-19 patients, but may have caused harm – specifically “an increased frequency of ventricular arrhythmias” and increased risk of death.

The study was based on medical records of thousands of hospitalized patients around the world, compiled by a Chicago-based company, Surgisphere Corp., whose CEO was listed as a co-author of the study. Among other issues, the reliability of Surgisphere data is now being called into question by more than 100 experts.

That May 22 study was widely reported on, under headlines like the Washington Post’s, “Antimalarial drug touted by President Trump is linked to increased risk of death in coronavirus patients, study says.”

Publication of the study also prompted the WHO to announce, one day later, a temporary pause of the HCQ arm of its so-called Solidarity Trial, which is studying and comparing four potential treatments for COVID-19. That pause has now been lifted, Tedros said on Wednesday.

Another journal, the New England Journal of Medicine (NEJM), also published a COVID-19 study based on records from the Surgisphere database, on May 1, although that study was not related to HCQ, but the use of common heart medications (ACE inhibitors and angiotensin-receptor blockers or ARBs.)

On Wednesday, NEJM also issued an “expression of concern”:

“Recently, substantive concerns have been raised about the quality of the information in that database,” it said. “We have asked the authors to provide evidence that the data are reliable. In the interim and for the benefit of our readers, we are publishing this Expression of Concern about the reliability of their conclusions.”

At Wednesday’s briefing in Geneva, WHO chief scientist Soumya Swaminathan said the decision to lift the pause on the HCQ arm of the Solidarity Trial did not mean the organization was at this stage endorsing the drug.

But it was encouraging ongoing clinical trials – both the WHO trials and others currently underway, such as the Recovery Trial in Britain, which she said has a dataset of more than 11,000 patients.

“We are now fairly confident, not having seen any differences in mortality, the data safety monitoring committees of both Solidarity and Recovery have recommended that the trial can continue,” she said.