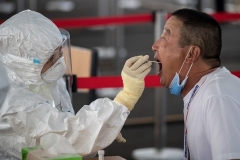 A Beijing resident is tested for COVID-19 last week, after several new domestic cases were reported in the Chinese capital. (Photo by Nicolas Asfouri/AFP via Getty Images)

(CNSNews.com) – Six months after China first reported the outbreak of an unknown virus in Wuhan to the World Health Organization, the U.N. health agency says a team will head back to the country where the pandemic began to investigate the origin.

“WHO has been saying that knowing the source of the virus is very, very important,” WHO Director-General Tedros Adhanom told a virtual briefing, referring to the “zoonotic source,” or how the coronavirus was able to jump from animals to humans.

“We can fight the virus better when we know everything about the virus, including how it started,” he said. “We will be sending a team next week to China to prepare for that and we hope that that will lead into understanding how the virus started, and what we can do for the future to prepare.”

The planned visit will take place seven weeks after the WHO’s World Health Assembly passed a resolution calling for an “independent and comprehensive” review into the pandemic and WHO’s response. It also called for WHO to work with other agencies “to identify the zoonotic source of the virus and the route of introduction to the human population.”

Tedros said at the time an inquiry would begin “at the earliest time possible.”

Over the weeks since the resolution was passed on May 19, the overall number of confirmed COVID-19 cases reported around the world has more than doubled, from 4.79 million to more than 10 million, and the number of deaths attributed to the coronavirus has climbed from around 319,000 to half a million.

For months, the U.S. and several other governments have been calling on China to allow unrestricted access to locations in Wuhan believed to be pertinent to the investigation.

They include a market that sold seafood as well as living animals including snakes and marmots, which was linked to many of the early cases when the outbreak first emerged late last year; and two laboratories where coronavirus research has taken place.

The Trump administration has led criticism, both of China’s handling of the outbreak and attempts to cover it up in the early stages, and the WHO response.  President Trump suspended funding to the agency, and then a month ago announced plans to withdraw.

Tedros did not provide details of the composition of the team due to visit China next week.

This will be the second WHO-led expert team to travel to China since health authorities there reported the outbreak to WHO’s country office on the last day of 2019.

The first arrived on February 17 – almost three weeks after Chinese President Xi Jinping agreed with Tedros that a team could visit “as soon as possible.”  That team, which included U.S. experts, visited three provinces, eventually arriving in Wuhan on February 22.

A U.S. Centers for Disease Control and Prevention (CDC) team had been ready to go in weeks earlier, but were not given permission by the Chinese government.

As of early Tuesday, the pandemic has killed more than 505,000 people, with more than 10.3 million cases reported, according to data compiled by Johns Hopkins University. Actual figures are thought to be significantly higher, given undetected asymptomatic infections, differing levels of testing, and varying standards and reliability of reporting.

Over the 24-hour period Sunday to Monday, WHO reported yet another record high of new confirmed cases – more than 178,000 across the globe. More than 60 percent of them were in the Americas, including more than 44,000 reported in the United States and more than 38,000 in Brazil.

As the vital search for a safe and effective vaccine continues, authorities in several parts of the world have moved to slow down or reverse measures to lift restrictions. New spikes of cases have been reported in a number of locations, including Arizona, Texas, Florida, and California, the English city of Leicester, and Australia’s Victoria state.

“Some countries are now experiencing a resurgence of cases as they start to re-open their economies and societies,” Tedros noted.

“We all want this to be over. We all want to get on with our lives. But the hard reality is: this is not even close to being over,” he said. “Although many countries have made some progress, globally the pandemic is actually speeding up.”