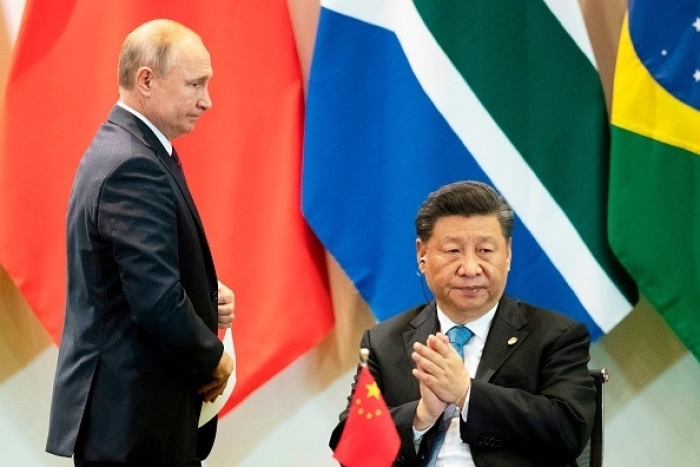 (CNSNews.com) – As President Biden prepares to attend back-to-back G7 and NATO summits dominated by the war in Europe, Chinese President Xi Jinping is rallying the bloc of major emerging economies known as BRICS, warning against the West’s “hegemony,” use of sanctions, and expansion of military alliances.

On the eve of a BRICS (Brazil, Russia, India, China, and South Africa) leaders’ summit hosted by Beijing, Xi delivered a speech on Wednesday night to a BRICS business forum in which he said called the crisis in Ukraine “a wake-up call.”

It showed, he said, “that blind faith in the so-called position of strength and attempts to expand military alliances and seek one’s own security at the expense of others will only land oneself in a security dilemma.”

“It has been proved time and again that sanctions are a boomerang and a double-edged sword,” he said. “To politicize the global economy and turn it into one’s tool or weapon, and willfully impose sanctions by using one’s primary position in the international financial and monetary systems will only end up hurting one’s own interests as well as those of others, and inflict suffering on everyone.”

Xi implicitly drew a contrast between historical Western “hegemony, group politics and bloc confrontation” and the model championed by China, based on purported respect for the U.N. Charter, and “win-win cooperation.”

“We in the international community should reject zero-sum games and jointly oppose hegemonism and power politics,” he said. “We should build a new type of international relations based on mutual respect, fairness, justice and win-win cooperation.”

Beijing’s refusal to condemn Russia’s invasion of a sovereign country – a clear violation of the U.N. Charter it claims to hold in such high esteem – and Xi’s siding with Putin on matters such as NATO enlargement and “indivisibility of security” have prompted the U.S. to warn that China risks finding itself “on the wrong side of history.”

While China has most openly sided with Putin, none of the other BRICS partners are supportive of sanctions against Russia. Of the five, only Brazil voted in favor of a General Assembly resolution in early March condemning the invasion. (Russia voted no, and the others abstained.)

In his comments to the BRICS forum, Putin like Xi blamed Western sanctions for global economic problems – without mentioning the Russian actions in Ukraine since 2014, and particularly this year’s invasion, that prompted them.

“More and more politically motivated sanctions are continuously introduced, mechanisms of exerting pressure on competitors are further strengthened,” Putin said. “There is intentional destruction of cooperation ties; transport and logistics chains are destroyed.”

“And all this is contrary to common sense and basic economic logic, it undermines business interests on a global scale, negatively affecting the wellbeing of people, in effect, of all countries.”

The West’s efforts to isolate and punish Russia over the invasion by targeting its energy exports have been offset by the fact China and India – the world’s two most populous countries and the first and third biggest energy consumers – have significantly increased their purchases of steeply-discounted Russian oil.

Citing Chinese customs data, Reuters reported this week that China had increased its imports of Russian oil by 55 percent in May over a year earlier.

The Associated Press reported last week that India has bought nearly 60 million barrels of Russian oil so far this year, compared to 12 million barrels for the whole of 2021.

National Security Council Coordinator for Strategic Communications John Kirby this week called China’s record purchases of Russian oil “yet another example of a growing collaboration between China and Russia with respect to Ukraine.”

He told a White House briefing that the U.S. government had from the outset “called on China to be a responsible power here and to join the rest of the world in condemning what Russia has done in Ukraine and in enforcing sanctions against Russia for it.”

Kirby responded more cautiously when asked about India’s stance, saying the U.S. values its relationship with India, “a very key strategic partner in the Indo-Pacific region.”

“Obviously, every country has to make their decisions for themselves,” he said. “These are sovereign decisions.”

“But we want as much pressure put internationally on Russia as possible,” Kirby added. “There needs to be costs and consequences for what Mr. Putin is doing.”

Together, the five BRICS countries account for more than 40 percent of the world’s population and almost a quarter of global GDP.