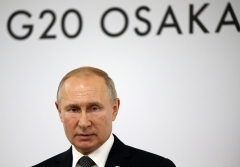 (CNSNews.com) – Treasury Secretary Janet Yellen said this week the United States will not attend “a number of G20 meetings” if Russia participates, but it remains unclear whether they will include the group’s leaders’ summit, to be hosted by Indonesia in the fall.

The Treasury Department says Yellen was referring to other G20 meetings, and White House Press Secretary Jen Psaki said the comment “wasn’t an indication of plans for us to boycott or not attend” the summit.

At a time when Western governments are working to sanction and isolate Russia over the invasion of Ukraine, Moscow has already indicated that President Vladimir Putin plans to take part in the summit, to be held on the resort island of Bali.

In Brussels last month, President Biden said he thought Russia should be ousted from the G20, but added that if other members resist the move, then Ukraine should be invited to the summit as an observer. He did not mention at the time an option of a boycott if Putin attends.

Yellen, however, appeared to do so during testimony on Capitol Hill on Wednesday.

“President Biden’s made it clear, and I certainly agree with him, that it cannot be business as usual in any – for Russia in any of the financial institutions,” Yellen said in response to a question during a House Financial Services Committee hearing.

“He’s asked that Russia be removed from the G20,” she continued, “and I’ve made clear to my colleagues in Indonesia that we will not be participating in a number of meetings if the Russians are there.”

The reference to Indonesia prompted the assumption that Yellen was talking about the summit, although as the rotating chair of the G20 Indonesia is hosting other meetings, including one at ministerial level in July.

But a Treasury spokesperson in response to queries pointed to meetings much sooner than that – later this month, when G20 finance ministers and central bank governors will meet on the sidelines of the World Bank and IMF spring meetings in Washington.

“The secretary was speaking about the G20 finance minister meetings Indonesia is hosting that are scheduled for the week after next in Washington, D.C.,” she said.

At Wednesday’s White House briefing, Psaki was asked if Yellen was talking about a boycott of the summit in Bali.

After recalling Biden’s words in Europe, Psaki noted that the summit was still seven months away, “which is a lifetime in our lives.”

“But it wasn’t an indication of plans for us to boycott or not attend,” she said of Yellen’s remarks. “It was just, ‘It shouldn’t be business as usual’ – which is something the president has also said.”

As Biden indicated in Brussels, there is resistance within the G20 to calls to exclude Russia.

Unlike the G7 which is united in its condemnation of Putin’s war – and kicked Russia out of what was then the G8 in response to its annexation of Crimea in 2014 – the ranks of the G20 include allies and partners of Russia.

China and Brazil have already rejected calls for Russia’s suspension from the G20. Beijing declared that “no member has the right to strip another country of its membership,” while Brazil’s foreign minister said his government “is clearly opposed to those initiatives, in line with our traditional position in favor of multilateralism and international law.”

In a further reflection of differences within the G20, when the U.N. General Assembly voted on Thursday to suspend Russia from the Human Rights Council, ten of the G20 members supported the move, two (Russia and China) voted against it, and six (Brazil, India, Indonesia, Mexico, Saudi Arabia, and South Africa) abstained.

Indonesia has taken a cautious approach to the crisis over Russia’s invasion of Ukraine, calling for a diplomatic solution and not joining the sanctions push, although it did vote in favor of two General Assembly resolutions in March critical of Russia’s actions.

Because of the differences within the G20, the April 20 meeting in Washington is likely to end with Indonesia as chair releasing a statement rather than the group issuing a customary joint one, the Jakarta Post reported this week, citing “sources familiar with the matter.”

The paper also said Russia may take part in the meeting virtually.

Just a week before the Russian invasion of Ukraine began, G20 finance ministers in a joint statement on global economic risks referred to “geopolitical tensions that are arising, and macroeconomic and financial vulnerabilities” but without specifically mentioning Ukraine.

If the tensions with Russia drag on, the impact will extend beyond Indonesia’s time at the helm of the G20 and spill over into the next presidency. And the next to preside, with effect from December 1, will be India, another country whose reluctance to confront Russia over Ukraine has been contentious.