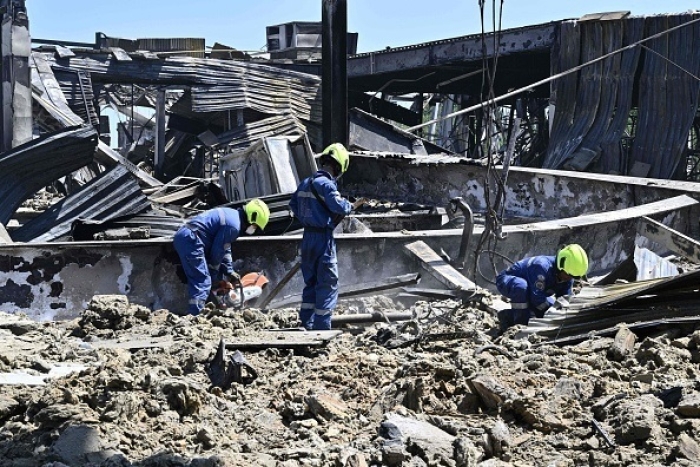 Emergency workers in the rubble at the Amstor mall in Kremenchuk, on Tuesday, a day after Ukrainian authorities say it was hit by a Russian missile, killing at least 18 people. (Photo by Genya Savilov/AFP via Getty Images)

(CNSNews.com) – As the U.N. Security Council met in emergency session in response to ongoing military attacks on Ukrainian civilian targets, President Volodymyr Zelenskyy said Russia should be labeled a “terrorist state” and questioned the legitimacy of its participation in the meeting – and in the U.N. in general.

“Unfortunately, as of now, the United Nations does not have a legal definition of ‘terrorist state’ agreed by all U.N. member-states,” Zelenskyy said at the start of a video message to the council on Tuesday afternoon.

“But the war that Russia is waging against Ukraine demonstrates not only the meaning of this concept, but also the urgent need to enshrine it legally – at the U.N. – and to punish any terrorist state.”

Ukraine requested the meeting after a series of deadly Russian missile strikes on civilian areas in Ukraine, including one on a shopping mall in the central city of Kremenchuk on Monday.  The reported death toll has risen to 18 but with dozens still missing it is expected to climb further, Zelenskyy said.

He listed other attacks over the past two days in which civilians were killed, including a rocket strike that killed eight people lining up for water in Lysychansk, shelling in residential areas in Kharkiv in which nine people were killed, and a strike in Ochakiv on the Black Sea coast which cost another three lives.

After reading out names and ages of some of the victims – children as young as six, a 76-year-old man, and a three-month-old baby gravely wounded in Ochakiv – Zelenskyy returned to his point about terrorism and Russia’s right to be a part of the U.N.

“Who of you does not agree that this is terrorism?” he asked, speaking through an interpreter. “If in any other part of the world any organization acted just like Russia, who is killing Ukrainians – if a country killed any peaceful people that would definitely be recognized as terrorism. Such an organization would become an enemy for all of humankind.”

Zelenskyy cited article six of the U.N. Charter, which says a member “which has persistently violated the principles contained in the present charter may be expelled from the organization.”

“Although Russia is violating the fundamental principles of the U.N. and the international legal order, it is still not held to account at the global level,” he said.

“It still remains in U.N. agencies and even enjoys the privileges of the seat it occupies, the seat of the permanent member of the U.N. Security Council, which Russia occupies solely due to the short-sightedness of politicians at the end of the Cold War.”

(Some have questioned the legitimacy of the Russian Federation having automatically inherited the permanent Security Council seat – and power of veto – formerly held by the Soviet Union.)

Zelenskyy said not only does Russia have no right to remain on the Security Council, but it should also be suspended from the General Assembly.

“Russia has no right to take part in discussing and voting in regard to the war in Ukraine, which is unprovoked and simply colonialist on the part of Russia. I urge you to deprive the delegation of a terrorist state of its powers in the U.N. General Assembly. That is possible. That is necessary. That is fair.”

When he addressed the meeting later, Russian deputy permanent representative Dmitry Polyanskiy did not respond to Zelenskyy’s claims about Russia’s status at the U.N., but he did spend more than three minutes complaining that Ukraine’s president had been allowed to address the meeting at all. 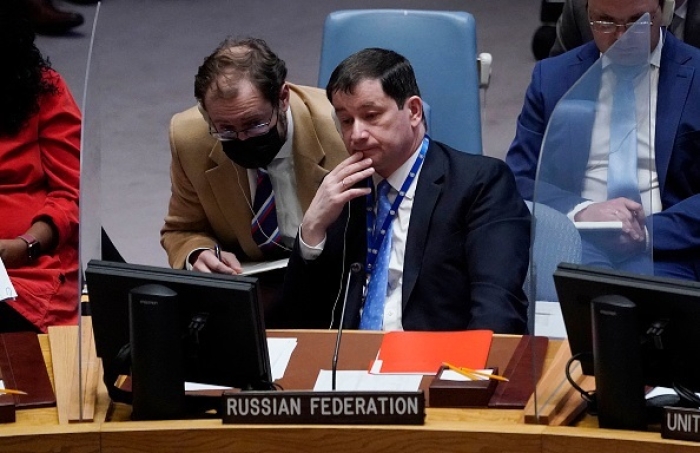 U.N. member-states that are not on the Security Council participate in its meetings by invitation, usually with the agreement of council members.

Polyanskiy said there had been no consultation on the matter on this occasion.

“The U.N. Security Council should not be turned into a platform for a remote P.R. campaign by President Zelenskyy in order to get more weapons from NATO,” he said.

The next 15 minutes of Polyanskiy’s statement was devoted to claims that the West ignored Ukrainian atrocities while Kyiv, abetted by its Western partners, has faked numerous incidents of supposed misdeeds by Russian forces in order to tarnish Russia’s name.

As for the attack on the shopping mall in Kremenchuk, Polyanskiy claimed that no missile had hit the mall, but that a “high precision” Russian strike had targeted nearby warehouses where weapons provided by the West were located.

“Ammunition that was stored in the warehouses detonated upon impact, starting a fire which then spread to the mall,” he said.