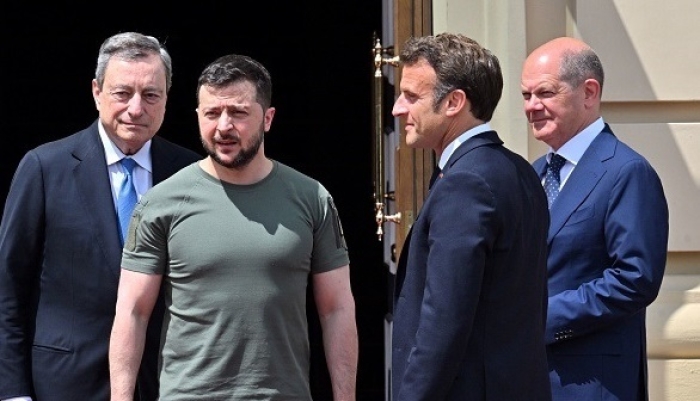 (CNSNews.com) – The leaders of the European Union’s most powerful states confirmed their support Thursday for Ukraine to be given “candidate status” for membership in the bloc, and pledged to continue supporting Kyiv financially and militarily for as long as necessary.

“You can count on the European brotherhood to ensure that Ukraine remains free,” he told Zelenskyy.

The leaders visited the country for the first time since the war began in a show of support amid fierce fighting between Ukrainian and invading Russian forces in the eastern Donbass region.

Candidate status is the first step of an accession process which has typically taken a decade or longer. (It took 10 years for Poland, Hungary, and Croatia to join, and 12 years for Romania and Bulgaria. North Macedonia has been a candidate for 18 years and Montenegro for 14 years.)

Zelenskyy has been calling for the process to be fast tracked for Ukraine, although some E.U. governments, France among them, have expressed skepticism that that can be feasibly achieved.

Italian Prime Minister Mario Draghi said during a joint press conference with the other leaders that the Ukrainian people were every day defending “the values of democracy and freedom that underpin the European project.”

“We cannot wait,” he said. “We cannot delay this process.”

A decision to formally grant candidate status to Ukraine could come as early as next week, when E.U. leaders meet for a two-day summit in Brussels.

German Chancellor Olaf Scholz said Thursday he would push at the summit for “a unified position” in support of Ukraine. All 27 E.U. member-states would need to agree, but having the support of the bloc’s three biggest economies is a boost for Ukraine’s bid.

Scholz also voiced support for candidate status for Moldova. Shaken by the Russian invasion, the former Soviet republic on Ukraine’s south-western flank applied to join the E.U. shortly after Kyiv did. 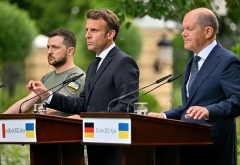 The visiting leaders, who traveled by train from Poland and Romania, also went to the towns of Irpin and Bucha near the capital, where they saw scenes of devastation left by Russian forces before they withdrew in early April. Scholz said they had witnessed “unimaginable cruelty.”

Macron sought to allay fears that France and others would pressure Ukraine to make territorial concessions to Putin – allowing Russia to hold on to some of the territory it has illegally occupied – as a price for ending the war.

“Neither Germany nor France will ever be negotiators behind Ukraine’s back,” he said in Kyiv.

“And they will never demand any concessions from Ukraine – this has never been and never will be the case.”

He said it was up to Zelenskyy to put forward conditions that were acceptable to the Ukrainian people.

Macron came under fire recently for saying that efforts must be made not to “humiliate” Russia in the context of eventual negotiations to end the fighting.

Asked in Kyiv about those remarks, Macron pointed to how the allies’ treatment of Germany after World War I had sown the seeds for World War II.

“France committed a historic mistake,” at the end of the 1914-1918 war, he said. “It lost the peace because it wanted to humiliate Germany.”

Macron said France had stood by Ukraine “from day one” of the invasion, and reiterated France’s position that it must prevail in the war. He also announced France would provide Ukraine with more long-range artillery, in the form of another six Caesar truck-mounted cannons.

‘Fans of frogs, liverwurst and spaghetti’

In his nightly video address to the nation, Zelenskyy thanked the visiting leaders both for their support for Ukraine’s E.U. aspirations and for making clear that “they agree that the end of the war and peace for Ukraine must be exactly as Ukraine sees them. As our people see them.”

Russian officials responded dismissively to the visit and to the E.U.’s current stance towards Russia more broadly.

Foreign Minister Sergei Lavrov said the candidates for E.U. membership could look forward not to economic benefits but to joining a geopolitical project “following the policy of establishing a unipolar world under the command of Washington.”

Lavrov said in an interview with Russia’s NTV channel that relations with the E.U. were no longer a foreign policy priority for Russia, which was expanding its contacts with the East.

Dmitry Medvedev, the former Russian president who is now deputy head of Kremlin’s national security council, referred mockingly on Twitter to Macron, Scholz, and Draghi as “fans of frogs, liverwurst and spaghetti.” He said their visit, along with promises of E.U. membership and “old howitzers,” would do nothing to bring Ukraine closer to peace.

Russia’s ambassador to the E.U., Vladimir Chizhov, told an event in St. Petersburg that relations between Moscow and the bloc were at their lowest point ever, despite important trade ties.

“What happens next?” he asked. “Either the E.U. will reconsider its position regarding Russia and we will jointly or in parallel devise new foundations for relations, or Europe, represented by the E.U., will morph into a backyard of global development over the next few decades.”