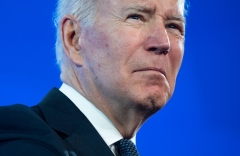 (CNSNews.com) - President Joe Biden is sending 3,000 U.S. troops, under U.S. command, from the United States to NATO allies in Eastern Europe "in the next few days," Pentagon spokesman John Kirby told a news conference on Wednesday.

The troop deployment is intended to deter Russian aggression and to reassure and defend U.S. allies, he said.

"These are not permanent moves," Kirby said. And the U.S. troops will not fight in Ukraine, he added.

The 3,000 troops mentioned today "are separate and in addition to" the 8,500 troops put on heightened alert last week, in case NATO activates its response force.

"Those 8,500 are not being deployed, but remain ready to move if called for the NATO response force or as needed for other contingencies as directed by the secretary or president Biden," Kirby said. "We continue to review our force posture and the situation in Europe, and we will make adjustments as the situation warrants."

Kirby said the deployment of 3,000 troops sends an "unmistakable signal to the world that we are ready to defend against any aggression."

As the secretary said on Friday, we do not know if Russia has made a final decision to further invade Ukraine. But it clearly has that capability. The Department of Defense will continue to support diplomatic efforts led by the White House and the state department to press for resolution.

We do not believe conflict is inevitable. The United States, in lockstep with our allies and partners, has offered Russia a path to de-escalate. But we will take all prudent measures to assure our own security and that of our allies.

Kirby said the troops are going to Poland, Germany and Romania, following "full consultation" with those countries.

Reporters pressed Kirby on whether there is any indication that Russian President Vladimir Putin might move beyond Ukraine, into Poland and Romania?

"What we see is clear evidence every day that he continues to destabilize the environment by adding more forces in the western part of his country and along Belarus," Kirby replied.

"In addition to additional naval activity in the Mediterranean and the North Atlantic, he clearly is providing himself many options and lots more capabilities. For exactly what purpose, we don't know right now. And because we don't know exactly what his purpose is, we want to make sure that we are ready on the NATO front to defend our allies.”

Kirby repeated that the message to Russia and the world is "that we take our NATO commitments are very, very seriously."

And he said other NATO nations -- Denmark, the U.K., France and others -- are also discussing the deployment of troops to Poland and Romania.

"This is not about an intel assessment of what Mr. Putin will or will not do," Kirby said. "We do not believe he has made a decision to further invade Ukraine. If he does make that decision, there's going to be consequences, but he has many options and capabilities available to him as to how he might do that. We simply do not know.

"We want to make sure that he knows that any move on NATO is going to be resisted and it is going to trigger Article Five. We are going to be committed to the defense of our allies. That is what this is all about."

Kirby said the Biden administration has the option of moving additional forces to Eastern Europe "if that is desired and needed."

"The steps we're talking about today could very well be preliminary steps to future ones we might take," he said.