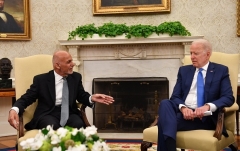 (CNSNews.com) - "I want to talk about happy things," President Joe Biden told a brief news conference at the White House on Friday, after reporters asked him questions about the announcement that Bagram Airfield, the largest U.S. base in Afghanistan, now has been turned over to Afghan security forces.

All U.S. and coalition troops have left Bagram, although a small number of troops remain elsewhere in the country.

When a fourth reporter tried to ask Biden about the danger of the Taliban taking over the country, Biden grew impatient:

"I'm not going to answer any more questions on Afghanistan," he said.

Look, it's the Fourth of July. I'm concerned that you guys are asking me questions that I'll answer next week. But this is the holiday weekend, I'm going to celebrate it. There's great things happening. The economy's growing at the fastest rate in 40 years; we've got a record number of new jobs; COVID deaths are down ninety percent; wages are up faster than any time in 15 years; we're bringing our troops home.

All across America, People are going to ball games, and doing good things. This is a good-- I'll answer all your negative questions, not negative, legitimate questions --

He meant to say he'd answer questions next week, but he trailed off as a fifth reporter changed the subject.

Biden, when he did respond to earlier questions about Afghanistan, said the U.S. is where it expected to be with the Afghanistan drawdown.

Asked about the Taliban taking over the country, Biden noted that the war has lasted for 20 years.

He said he thinks the Afghan government has the capacity to sustain itself. "I am concerned that they deal with the internal issues that they have, to be able to generate the kind of support they need nationwide to maintain the government."

Asked about the U.S. ability to protect the Afghan government in Kabul, if the security situation falls apart, Biden said the U.S. has "over-the-horizon capacity that we can be value-added, but the Afghans are going to have to be able to do it themselves with the air force they have, which we're helping them maintain."