Blinken Pleads for Diplomacy: 'If Russia Doesn't Invade...We Will Be Relieved' 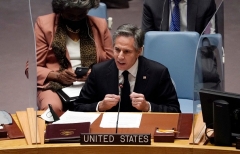 Secretary of State Antony Blinken speaks at a UN Security Council meeting on Ukraine, on February 17, 2022. (Photo by TIMOTHY A. CLARY/AFP via Getty Images)

(CNSNews.com) - "Diplomacy is the only responsible way to resolve this crisis," Secretary of State Antony Blinken told the U.N. Security Council on Thursday, as he described in detail how Russia might go about invading Ukraine.

He described the kind of real or made-up provocations Russia might use to justify an invasion, including a chemical attack, a staged drone strike, a terrorist bombing, or the discovery of a mass grave.

"If Russia doesn't invade Ukraine, then we will be relieved that Russia changed course and proved our predictions wrong," Blinken said. "That would be a far better outcome than the course we're currently on. And we'll gladly accept any criticism that anyone directs at us."

However, if Russia chooses war, Blinken echoed President Biden in promising a "sharp" and "decisive" response.

He noted that more than three weeks ago, the Biden administration sent Russia a document "that detailed concrete, reciprocal steps that we can take in the near term to address our respective concerns and advance the collective security concerns of Russia, the United States, and our European partners and allies. This morning, we received a response, which we're evaluating," Blinken said.

"Earlier today, I sent a letter to Russia’s Foreign Minister Sergei Lavrov, proposing that we meet next week in Europe following on our talks of recent weeks to discuss the steps that we can take to resolve this crisis without conflict."

Blinken also mentioned other high-level meetings that could "pave the way for a summit with key leaders in the context of de-escalation..."