Chairman of New China Committee: 'We Are in the Danger Zone With Respect to Taiwan' 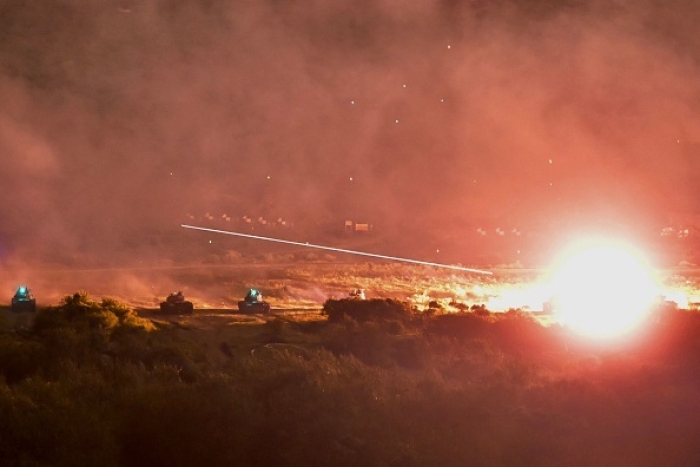 (CNSNews.com) - Rep. Mike Gallagher (R-Wis.), the chairman of the newly established House Select Committee on China, says the "big lesson" of the war in Ukraine is the deterrent value of a robust military.

Gallagher said he's unwilling to accept cuts in U.S. defense spending, and he named 2024 as the year China may try to take Taiwan by force. "We are in the danger zone with respect to Taiwan," he warned:

"Ultimately, I have to make the case with my colleagues that arming Taiwan to the teeth, revitalizing and modernizing our own military is a sound investment, and that America can afford survival," Gallagher told "Mornings With Maria" on Wednesday.

"I think the big lesson of Ukraine is that it's actually more costly over time if you have a weak hard-power posture, because deterrence then fails, and you find yourselves having to spend tens of billions of dollars on arming allies or partners in the context of a war, so he deterrence is always cheaper.

"And that's the case we have to make. We are in the danger zone with respect to Taiwan. Xi Jinping is getting increasingly aggressive. We have to rearm ourselves and help Taiwan defend itself."

China's contracting economy and its shrinking population only makes President Xi Jinping "more aggressive" in the near term, or the current decade, which Gallagher calls the "terrible 20s."

"I think Xi Jinping is aware of that, looking at that, and so if he wants to achieve his life ambition of taking Taiwan by force, he's got to make a move within this decade.

"And this is a tough decade for us," Gallagher continued. "We have some defense bills that are coming due -- Columbia class subs and some other things. So this is really the danger zone we're in right now, and we have to extend deterrence throughout the decade to get a more favorable terrain for competition in 2030s."

Host Maria Bartiromo pointed to open-source reporting that says China's Communist leadership is planning to invade Taiwan in the next 18 months.

"So 2024 really is the year of maximum danger in my opinion. But who knows. It could happen at any moment, or it could not happen."

'We've been monitoring the situation'

At the White House on Tuesday, White House spokeswoman Karine Jean-Pierre offered a mild response to a reporter who asked about Chinese companies sending non-lethal assistance to Russia for its war in Ukraine: "What is the United States saying to the Chinese government about this?" the reporter asked:

"So, we’re closely monitoring the situation, as we have been since the war started," Jean-Pierre said.

"We will continue to communicate to China the implications of providing material support to Russia’s war against Ukraine. We — we have talked about this — about this many times that we — we will, you know, be very clear what it means to support Russia’s aggression against Ukraine.

Jean-Pierre refused to say what the "implications" are: "I'm not going to get into diplomatic or private conversations from here," she said.  "I’m just going to let you know that we’ve been monitoring the situation.  And we’ve been very clear with — with the Chinese government on this."