Defense Secretary Austin: 'This Is a Crucial Moment' for Ukraine; US Sending $2.5B in Battlefield Assistance 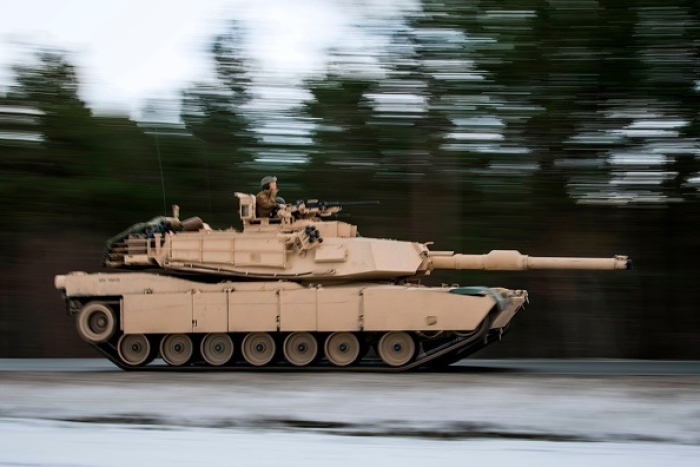 An M1 Abrams tank takes part in a NATO-led military exercise in Norway. (Photo by JONATHAN NACKSTRAND/AFP via Getty Images)

(CNSNews.com) - Speaking in Germany Friday morning, Defense Secretary Lloyd Austin declared this to be a "crucial moment" in the Russia-Ukraine war.

"Russia is re-grouping, recruiting and trying to re-equip," Austin said at a gathering of defense leaders from dozens of nations. "This is not a moment slow down. It's a time to dig deeper.

Austin announced another major round of U.S. security assistance for Ukraine -- at $2.5 billion, this package is "one of the largest yet," he said.

"It brings total U.S. security assistance to Ukraine to more than $26.7 billion since Russia's unprovoked invasion last February. Our new package provides even more air-defense capabilities to help Ukraine defend its cities and its skies. And that includes NASAMS munitions and eight Avenger air-defense systems.

"So the United States remains determined to lead and to do our part to help Ukraine defend itself."

The Germans have balked at providing their Leopard battle tanks to Ukraine unless the United States sends M1 Abrams tanks, which the U.S. Defense Department is reluctant to do. German Chancellor Olaf Scholz reportedly is worried about acting unilaterally and provoking Russia.

A Defense Department spokeswoman explained on Thursday why the U.S. is reluctant to supply Ukraine with Abrams tanks.

"The Abrams are a — it's more of a sustainment issue," Sabrina Singh, deputy Pentagon press secretary, told reporters:

"I mean, this is a tank that is — requires jet fuel, whereas the Leopard and the Challenger...it's a different engine. They require diesel. It's a little bit easier to maintain. They can maneuver across large portions of territory before they need to refuel.

"The maintenance and the — the high cost that it would take to maintain an Abrams is just — just doesn't make sense to provide that to the Ukrainians at this moment.

"As you know, we've provided the Bradleys. We're seeing other nations step up and continue to provide equipment and material to Ukraine that they can. Ultimately, this is Germany's decision. It's their sovereign decision on what security assistance they will provide, so we won't be able to speak to them. But I think that we are certainly doing what we can to support Ukraine in — in what — in what they need."

"The Abrams tank is a very sophisticated, very capable armored vehicle, armored weapon system. And it does have special requirements. It would require some unique supply chain requirements and maintenance and operation requirements that other tanks probably wouldn't, and (those other tanks) would be easier for the Ukrainians to learn how to use and to use effectively on the battlefield."

Host Jake Tapper asked Kirby about Germany's refusal so far to send its tanks -- or allow other European countries to send German-made tanks -- to Ukraine:

"Well, difficult to know exactly what the Germans are thinking. And I certainly wouldn't want to speak for them," Kirby said:

"I would just make a couple of points. Germany is one of the leading financial contributors to Ukraine. They have been right at the forefront since the -- even before the war started. They have evolved their capabilities over time, Jake. They have provided more advanced, including air defense, systems to Ukraine.

"And so they're working through this in a sovereign way, in a way that's unique to German -- to Germany and to their domestic concerns. And we have to respect that. We're grateful that what -- for what they have provided. And we're grateful that they're thinking about providing tanks.

"And we will just -- we're just going to have to see where this goes."

We may see where it goes following this morning's Ukraine defense meeting in Germany.