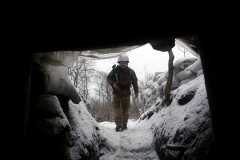 A Ukraine soldier on patrol near Zolote village, in the eastern Lugansk region, on January 21, 2022. (Photo by ANATOLII STEPANOV/AFP via Getty Images)

(CNSNews.com) - Ukraine is not a member of NATO, but -- "We are going to continue to help them defend themselves," Pentagon spokesman John Kirby told CNN's Wolf Blitzer on Monday.

Blitzer asked Kirby, "Why should the U.S. get involved in helping Ukraine?"

"We are going to continue to help them defend themselves," Kirby, a retired admiral, said:

Just over the weekend, Wolf, another three deliveries of additional arms and ammunition and some security assistance material we flew to Kiev. They have got it there. Other allies, like the Brits, are doing the same thing.

Earlier on Monday, Kirby announced that Defense Secretary Lloyd Austin has placed 8,500 U.S. troops on "heightened preparedness" in response to the Russian military threat along the Ukraine border.

"No decisions have been made to deploy any forces from the United States at this time," Kirby told a news conference on Monday. The "bulk" of the 8,500 U.S. troops would provide support to the NATO Response Force, if it is activated," he said:

"As you have heard me describe many times, our commitment to the security of NATO allies and our Article 5 commitment are ironclad," Kirby said. “As the president has also made clear, the United States will act firmly in defense of its national interests in response to actions by Russia that harm us, our allies, our partners.

“As part of that commitment, the Department of Defense maintains significant combat-capable forces forward in Europe to deter aggression and enhance the alliance’s ability to defend allies and defeat aggression if necessary.”

Hours later, Kirby told Blitzer: "All we have done right now, today, is put these troops on a heightened alert. Some of them are on a 10-day tether, if you will, to be ready to go in 10 days, and we're moving it down to five days. Others will have to get from a farther state of readiness to closer. But there's been no deployment orders at this time."

As part of the NATO Response Force, "NATO would decide" where the American troops go, if they go.

"But I think (NATO) Secretary-General Stoltenberg made it very clear that, if he were to do something like this, it would be on NATO's eastern flank. So you would think about the Baltics. Think about countries like Romania and Bulgaria, that kind of thing. It would be on the eastern flank of NATO to bolster their capabilities in their own self-defense.”

Kirby said some of the U.S. troops will be "combat-capable."

"There's no question about that. I mean, combat-credible power is what you're looking for here. But there would also be a sizable amount of troops dedicated to medical support and aviation, logistics and sustainment. It'll be a very comprehensive package."

Blitzer asked Kirby, "What Russian actions would prompt NATO to actually call up and deploy these 8,500 U.S. troops?"

"Well, I think those are the kinds of decisions that policy-makers at NATO and here in the United States are working their way through. I wouldn't get ahead of that process,” Kirby said:

But, Wolf, I can't rule out the fact that there may not be some bolstering that needs to be done even before that, because we want to make sure we're ready. It takes time to get these capabilities into place.

So, we're taking a look, I think, at a whole range of potential options for bolstering the capabilities of our -- of NATO's eastern flank. And I think, again, policy-makers are working their -- working themselves through and what the indicators would be for that.

“But we didn't get concrete results out of the talks that had occurred. Now, Secretary Blinken made it very clear that there's still room for diplomacy. We obviously want to see that succeed.

“But, in the meantime, Wolf, we have also seen Vladimir Putin add to his force capability, not just in the western part of his own country, but in Belarus as well. So he has shown no signs, as I said earlier today, of de-escalating. Quite the contrary.

“And I think it's something we're all watching with great concern. Again, I want to stress, no troops are flying over there today. These are really just getting them on a heightened alert posture to be ready in case they're needed.”

Kirby said no one knows if Russia will invade Ukraine, as it did in 2014. But he also noted that Russian President Vladimir Putin is "increasing his military options available to him" by adding more and more troops.

“And we want to make sure that we are standing by our NATO partners and that he fully understands the consequences should he incur again."

Kirby said no one wants another war. "There's no reason for it to get that way. But if our NATO allies need some support, we want to make sure they know we're there for them."