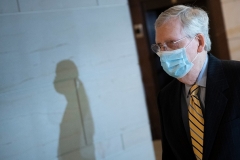 (CNSNews.com) - All Americans wish that the long war in Afghanistan had been "conclusively won," but it hasn't been," Senate Majority Leader Mitch McConnell (R-Ky.) said on Monday.

"A rapid withdrawal of U.S. forces from Afghanistan now would hurt our allies and delight the people who wish us harm," McConnell warned.

According to the Associated Press: "U.S. officials said military leaders were told over the weekend about the planned withdrawals and that an executive order is in the works but has not yet been delivered to commanders."

Don't do it, McConnell said in a speech on the Senate floor on Monday:

A rapid withdrawal of U.S. forces from Afghanistan now would hurt our allies and delight the people who wish us harm. Violence affecting Afghans is still rampant. The Taliban is not abiding by the conditions of the so-called peace deal.

The consequences of a premature American exit would likely be even worse than President Obama’s withdrawal from Iraq in 2011, which fueled the rise of ISIS and a new round of global terrorism. It would be reminiscent of the humiliating American departure from Saigon in 1975.

We’d be abandoning our partners in Afghanistan, the brave Afghans who are fighting the terrorists and destroying the government’s leverage in their talks with the Taliban to end the fighting. Our retreat would embolden the Taliban, especially the deadly Haqqani wing, and risk plunging Afghan women and girls back into what they experienced in the 1990s.

It would hand a weakened and scattered al Qaeda a big propaganda victory and a renewed safe haven for plotting attacks against America. And it would be welcome news to Iran, which has long provided arms and support to the Taliban and explicitly seeks our retreat from the Middle East.

A disorganized retreat would jeopardize the track record of major successes this Administration has worked hard to compile.

McConnell noted that "a small minority" of both Republicans and Democrats would back another troop drawdown. But losing our resolve will not change the terrorists' resolve, he warned:

“The situation we face today is totally different than we faced ten years ago. We do not have hundreds of thousands of soldiers engaged in combat abroad. We are not an occupying force.

“Today our limited American military presence in the Middle East is supporting local forces and enabling multinational efforts. We are playing a limited but important role in defending American national security and American interests against terrorists, who would like nothing more than for the most powerful force for good in world history to simply pick up our ball and go home. They would love that," McConnell said.

President Trump campaigned on a promise to end America's "endless wars," and he has tweeted that sentiment several times.

On Oct. 7, he wrote: "We should have the small remaining number of our BRAVE Men and Women serving in Afghanistan home by Christmas!"

In May, he tweeted: "We are acting as a police force, not the fighting force that we are, in Afghanistan. After 19 years, it is time for them to police their own Country. Bring our soldiers back home but closely watch what is going on and strike with a thunder like never before, if necessary!"

In another tweet in May, Trump questioned how he could be acting "in an 'impulsive manner' in Afghanistan," when the U.S. has been there for 19 years.