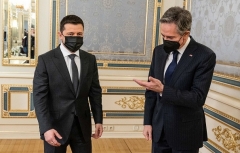 Secretary of State Antony Blinken meets with Ukrainian President Volodymyr Zelensky in Kyiv on January 19, 2022. The United States confirmed that it authorised an additional $200 million in security aid to Ukraine as it faces threats of a Russian invasion. (Photo by ALEX BRANDON/POOL/AFP via Getty Images)

(CNSNews.com) - White House spokeswoman Jen Psaki on Tuesday blamed Russian President Vladimir Putin for creating a "crisis" in Ukraine by sending 100,000 Russian troops to its borders and by conducting joint military exercises in neighboring Belarus and on Ukraine's eastern border.

"So, let’s be clear: Our view is, this is an extremely dangerous situation. We’re now at a stage where Russia could at any point launch an attack in Ukraine," Psaki said.

"And what Secretary Blinken is going to go do is highlight very clearly there is a diplomatic path forward.  It is the choice of President Putin and the Russians to make whether they are going to suffer severe economic consequences or not."

Blinken was in Ukraine on Wednesday, where he met with U.S. Embassy staff ahead of a planned Friday meeting with the Russian foreign minister in Berlin.

"We have tried make clear that there are two paths for Russia," Blinken said. "There is the path of diplomacy and dialogue to try to resolve whatever differences there are peacefully, through diplomacy – clearly the preferable path, clearly the most responsible path and the one that we would prefer.

"But there is also the path, if Russia chooses to renew aggression, of confrontation and consequences for Russia, and we have been working to build out both of those paths in very close coordination and collaboration with allies and partners."

Blinken said the U.S. is committed to Ukraine's "sovereignty, to its territorial integrity, to its independence," but President Biden has ruled out sending combat troops to the country.

“That’s not on the table,” Biden told reporters on December 8. "We have a moral obligation and a legal obligation to our NATO allies if [Russia] were to attack, under Article 5. It’s a sacred obligation. That obligation does not extend...to Ukraine.”

Putin is demanding assurances that Ukraine will not be admitted to NATO.

Blinken said on Wednesday the impasse is "bigger than Ukraine."

It’s bigger than Ukraine because what Russia is doing with the aggression that it has already committed and the threat of further aggression is to challenge the very basic principles that undergird the entire international system and are necessary for trying to keep peace and security.

If we allow those principles to be violated with impunity, then we will open a very large Pandora’s box, and the entire world is watching what is happening here.

"Well, the aim here is, if he determines, if he decides to launch an attack is to make him regret that decision. The president has said, in no uncertain terms, that he will impose sanctions, that he will impose retaliation. That will be a problem for Russia and the Russian economy. Ultimately at the end of the day, if this is a decision that president Putin decides to make, it is one that will not bear out well for Russia in the end," Bedingfield said.

"And what president Biden has been able to do, as you saw from Secretary Blinken being on the ground, an intensive work that's been happening in Europe, he has been able to work with European allies to bring them together to be united around this issue which I think you will remember from having covered it. It is a drastically different tack than the previous president took.

"So President Biden has been very clear -- if President Putin makes this decision, he (Biden) will impose sanctions, and ultimately this will be a terrible decision for the Russian people and the Russian economy."

Bedingfield also said the U.S. is trying to "create an environment of de-escalation."