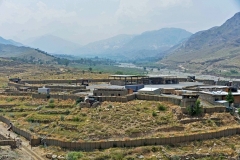 A US military base now handed over to Afghan forces, is pictured in Achin district of Nangarhar province in July 2020. (Photo by NOORULLAH SHIRZADA/AFP via Getty Images)

(CNSNews.com) - As the Biden administration begins the withdrawal of U.S. troops from Afghanistan, Secretary of State Antony Blinken says the U.S. is "not disengaging" from the country.

"Even as we're withdrawing our forces, we are not disengaging from Afghanistan," Blinken told CNN's Jake Tapper on Tuesday.

We have trained over the years, as you know very well, more than 300,000 of them. So, all of that remains. And I think that there are different actors at work now, who I hope will keep moving this in a more positive than negative direction.

But we have to plan, we are planning for every scenario.

Blinken admitted that those "scenarios" include civil war and a Taliban takeover, as one Democrat senator has warned:

"Look, Jake, that is certainly a possible scenario," Blinken said.

"Now, no one has an interest in renewed civil war in Afghanistan. Certainly, the Afghan people don't. I don't think, ultimately, either the Afghan government or the Taliban do.

"None of Afghanistan's neighbors do, neighbors that -- and other countries in the region that have basically been free-riders for the last 20 years, as we have been engaged there with our NATO allies and partners, who are now going to have to decide, given their interests in a relatively stable Afghanistan, given the influence that they have, whether they're going to try to use that influence in a way that keeps things within the 40-yard line.

"So, a lot of people are having their minds concentrated by the president's decision."

Tapper asked Blinken about the thousands of Afghans who have worked for the United States in Afghanistan and now fear for their lives. Tapper noted that around 18,000 of them are eligible for visas, but "it's an arduous and lengthy process."

"Yes, Jake, I'm really, really glad you flagged that, because it is vitally important," Blinken responded:

We have had this program in Iraq and also in Afghanistan. And, yes, we want to make sure that people who have put their lives on the line working with American folks in uniform, working with our diplomats, who have put not just themselves in jeopardy, potentially their families as well, can get expedited consideration, if they decide that they want to try to come to the United States.

And you're exactly right. We have got about 18,000 people already in the pipeline, 9,000 of whom are relatively far along. Another 9,000 are just at the beginning of the process. And, clearly, more are likely to sign up.

So, we are working very hard to make sure that we have got in place the resources to work that program, to work it quickly, expeditiously.

When I was up talking to the House and the Senate about Afghanistan, one of the things that I focused on was the need for us all to come together and make sure that program has the resources it needs.

Tapper also asked Blinken what will happen to Afghan girls and women, who enjoyed relative freedom under U.S. protection:

"Our support for them will endure," Blinken said. "And I can say very clearly and categorically that an Afghanistan that...does not respect their rights, that does not sustain the gains we have made, will be a pariah."