SIGAR: U.S. War in Afghanistan 'Failed'; A 'Tragedy That Unfolded Over 20 Years' 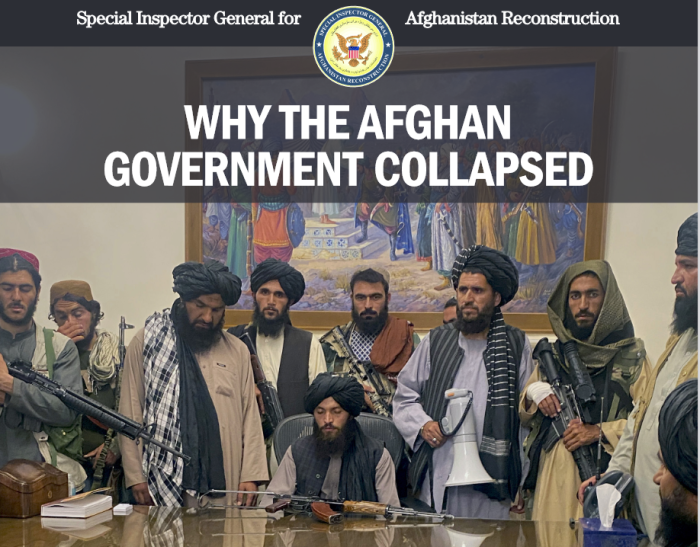 Following the collapse of the Afghanistan, the House Oversight and Reform Committee directed the Special Inspector General for Afghan Reconstruction to examine the factors that contributed to the dissolution of the Afghan government and the relative success or failure of U.S. reconstruction efforts to build and sustain Afghan governing institutions since 2002. (Photo: SIGAR report)

1. "The Afghan government failed to recognize that the United States would actually leave."

2. "The exclusion of the Afghan government from U.S.-Taliban talks [a Trump administration effort] weakened and undermined it."

3. "Despite its weakened position, the Afghan government insisted that the Taliban be effectively integrated into the Republic, making progress on peace negotiations difficult."

4. "The Taliban were unwilling to compromise. The U.S.-Taliban agreement emboldened the insurgent group."

6. "The Afghan government’s high level of centralization, endemic corruption, and struggle to attain legitimacy were long-term contributors to its eventual collapse."

The report says history will judge whether things could have turned out better.

The conclusion is devastating:

"On August 15, 2021, former President Ghani boarded a helicopter and fled the country. With that, the two-decade long U.S. effort to transform Afghanistan came to a close.

"Some gains were achieved before the Republic’s collapse, and residual elements of the Afghan government remain. These circumstances, however, offer little consolation. The situation in Afghanistan following the government’s dissolution reflects a significant deviation from what the United States aimed to help create..."

"Whether a different outcome could have been achieved is a question for history. For now, what stands out most is the significance of the tragedy that unfolded over 20 years. Before the Republic’s collapse, SIGAR had identified approximately $19 billion of waste, fraud, and abuse in our published reports and closed investigations.

"But lives lost were the far greater cost. Overall, the U.S. effort in Afghanistan -- one goal of which was to help the Afghan government become sufficiently legitimate and capable -- resulted in the deaths of 2,456 American and 1,144 allied service members. An additional 20,666 U.S. troops were wounded.

"Afghans, meanwhile, faced an even heavier toll. At least 66,000 Afghan troops were killed. More than 48,000 Afghan civilians were killed and at least 75,000 were injured—both likely significant underestimations.

"If there is one overarching lesson to be learned from the totality of this tragedy, it is that any future U.S. reconstruction mission similar in scale and ambition to that in Afghanistan is likely to be difficult, costly, and defined by the real possibility of an unfavorable governance outcome."