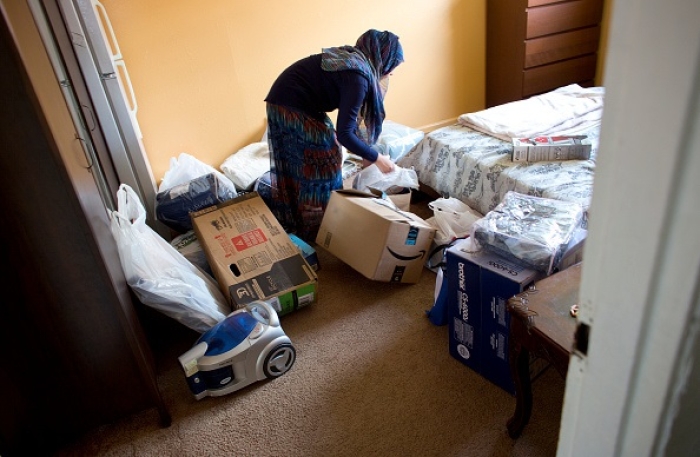 Refugees from Afghanistan move into their apartment in the Queens borough of New York City. (Photo by Andrew Lichtenstein/Corbis via Getty Images)

(CNSNews.com) - The U.S. State Department announced on Thursday it is launching a new program in which private American citizens can directly sponsor refugees from around the world who are fleeing conflict and persecution.

"The Welcome Corps invites Americans to do what we do best -- welcoming newcomers, being good guides, neighbors, and friends," said Assistant Secretary Julieta Noyes from the Bureau of Populations, Refugee, and Migration.

"The Welcome Corps is the boldest innovation in the U.S. refugee resettlement in four decades, and it reflects the Biden administration’s commitment to expand community engagement as we rebuild our refugee program," Noyes said:

"It’s designed to strengthen and expand our country’s capacity to resettle refugees by harnessing the energy of private sponsors from all walks of life – including community volunteers, faith and civic groups, veterans, diaspora communities, businesses, colleges, universities, and more.

"Private sponsors will help refugees find housing and employment, enroll their kids in school, enroll the adults in English classes, and connect with other essential services, including those that are funded by federal programs.

"The Welcome Corps is distinct from other sponsorship programs, like Uniting for Ukraine, in that private sponsors will support refugees who are being permanently resettled in the United States and help them integrate as thriving members of their new communities."

Phase one of the Welcome Corps seeks groups of five or more Americans (or legal permanent residents) who must apply to form a private sponsor group. Once certified, the group will be matched with a refugee who is already approved for resettlement in the United States.

Noyes said requiring multiple sponsors in one group is intended to provide refugees with more than one person who can help them, and it “creates greater connections with the community."

In phase two of the program's launch, groups will be able to choose the specific refugees they would like to sponsor.

"Our goal in 2023 is to mobilize 10,000 Americans to step forward as private sponsors, and help resettle at least 5,000 refugees," Noyes said

The Biden administration has proposed a 125,000-person ceiling on refugee admissions for Fiscal Year 2023, the same cap it set for the last fiscal year, although actual admissions have fallen well short of that.

"The launch of Welcome Corps is one initiative, but we’re doing a lot of work with our traditional resettlement agency partners to try and speed up processing while maintaining the integrity and the security of the program and not in any way changing the requirements," Noyes said.

"Refugees are the most vetted individuals to enter this country," she added.