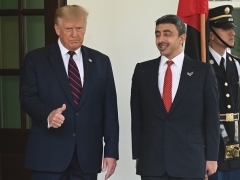 (CNSNews.com) - Several hours before presiding over a historic agreement between the United Arab Emirates and Israel, President Donald Trump told "Fox & Friends," this is just the first step on the road to "peace in the Middle East."

He said many more countries and even the Palestinians will join the UAE and Bahrain in recognizing Israel:

And then when I came in, I was told it was an impossible thing -- you could never get it done. And we went around the other way. Instead of dealing with the Palestinians we took the money away. We used to give them $750 million, and they treat us badly, and I said, why do they treat us badly when we give them all this money?  Nobody ever did this. I took it away.

They are going to make a deal, you watch. But we started dealing with other people, and everyone said this couldn't happen. And we made a deal with the UAE...and then Bahrain came in, and we have many others going to be coming in over a short period of time. And the Palestinians will ultimately come in, too, and you're going to have peace in the Middle East without being stupid and shooting everybody, and killing everybody, and having blood all over the sand.

But they said that it's an unbelievable deal and a very important deal. So we have two countries. We have many others that we're negotiating with right now, and the Palestinians will be brought in, because all of their supporters, all of the people that give them lots of money, are coming into the deal, so otherwise they'll be left out in the cold.

President Trump was hosting the signing of the Abraham Accord at noon at the White House.

Prime Minister Binyamin Netanyahu and the foreign ministers of UAE and Bahrain will agree to the normalization of diplomatic relations.

As President Trump previously announced, "They will exchange embassies and ambassadors, and begin cooperation across the board and on a broad range of areas, including tourism, education, healthcare, trade, and security.

"This is a truly historic moment," Trump announced last month. "Not since the Israel-Jordan peace treaty was signed more than 25 years ago has so much progress been made towards peace in the Middle East."