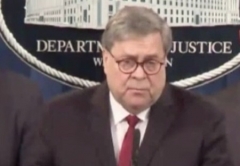 Responding to a statement by Attorney General Bill Barr reporting that the Justice Department (DOJ) has not found evidence of enough voter fraud to overturn the election of Joe Biden as president, President Donald Trump’s legal team said it is unaware of any actual investigation into the issue.

Trump attorneys Rudi Giuliani and Jenna Ellis issued a statement Tuesday claiming that they have collected a sufficient number of affidavits containing sworn testimony by eyewitnesses alleging voter fraud, but the DOJ has yet to investigate the allegations.

“With all due respect to the Attorney General,” the official response of the Trump legal team reads, “there hasn’t been any semblance of a Department of Justice investigation.”

Additionally, Trump’s lawyers say it appears that the DOJ hasn’t audited any suspect voting machines or issued any subpoenas to determine whether or not voting fraud occurred:

“We have gathered ample evidence of illegal voting in at least six states, which they have not examined. We have many witnesses swearing under oath they saw crimes being committed in connection with voter fraud. As far as we know, not a single one has been interviewed by the DOJ. The Justice Department also hasn’t audited any voting machines or used their subpoena powers to determine the truth.”

According to a report from the Associated Press on Tuesday, Barr stated that “To date, we have not seen fraud on a scale that could have effected a different outcome in the election.”

Attorney General Barr, in a leaked November 9th memo, directed DOJ officials “to pursue substantial allegations of voting and vote tabulation irregularities prior to the certification of elections in your jurisdictions in certain cases, as I have already done in specific instances.”

According to Reuters, Barr’s directive was issued “several hours after Barr met with Republican Senate Majority Leader Mitch McConnell,” who argue that Trump has every right to investigate allegations of election “irregularities.”