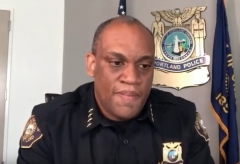 The city of Portland, Oregon suffered the highest number of deadly crimes in July since the 1980s, according to the Portland Police Bureau.

During the month of July, 15 fatal shootings or stabbings have been investigated by police, according to Portland news KATU. Since May 4, Portland police have investigated 22 deaths, 15 of which were in July.

Chuck Lovell, Portland Chief of Police, held a press conference on July 30, where he provided updates on Portland policing.

“That’s very concerning to know that that many people have been killed in such a short period of time,” said Lovell, citing the elimination of the department’s Gun Violence Reduction Team as a contributing factor.

In June, the Portland City Council voted to approve a 2020-2021 budget, which cut $16 million in police funding and dissolved the Gun Violence Reduction Team.

“July 1, we lost our Gun Violence Reduction Team, and that’s forced us into a position where we have to really kind of look at what resources we can bring to bear, absent that structure that we had,” Chief Lovell said.

Portland police have had to deal with an increased number of shootings in recent months. According to police data, in the last three months, police answered calls for 167 shootings, up from 96 shootings over the period last year, KATU reports.

Portland police have made more than 400 arrests in just the past two months during the ongoing violent protests, Associated Press reports.  Additionally, the protest violence has been responsible for $23 million in damages and lost customers to downtown businesses, according to The Oregonian.