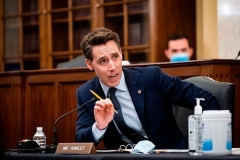 (CNSNews.com) – Senator Josh Hawley (R-Mo.) on Tuesday challenged major corporations and celebrities who endorse their products to pledge that they are not relying on forced or slave labor. The move came a day after Hawley introduced a bill designed to hold corporate America accountable for having slave labor in their supply chains.

“I challenge every major American corporation making products overseas in #China or elsewhere to pledge that they are #slavefree, that they DO not and WILL not rely on forced, slave labor,” he tweeted.

Among others, Hawley has challenged Nike and the National Basketball Association (NBA) to take the pledge.

In a statement Monday announcing his bill, Hawley said that for a long time, “corporate America and the celebrities that hawk their products” have been “talk[ing] up corporate social responsibility and social justice at home while making millions of dollars off the slave labor that assembles their products.”

“If corporate America wants to be the face of social change today, they should have to certify they are completely slave-free,” he said. “Participate in independent audits to verify it and disclose steps to ensure slave labor won’t become part of the equation later on. And if they refuse to do so, they should pay the price. That’s social responsibility.”

• Compels companies to disclose the steps they are taking to eradicate forced labor, slavery, and human trafficking from their supply chains

A study earlier this year by the Australian Strategic Policy Institute found that at least 83 multinationals have links to forced labor by minority Muslim Uighurs in factories across China. The companies included Nike, Adidas, Apple, Microsoft, and Samsung.

Hawley is a leading critic in Congress of the Chinese Communist Party. Last month the Senate passed a resolution introduced by him, condemning the CCP’s proposed national security law aimed at tightening control over Hong Kong. Beijing shrugged off widespread criticism, and the law came into effect on June 30.