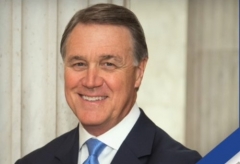 (CNS News) – When asked how many trillions of dollars should be spent on the latest coronavirus relief bill – the Republicans want $1 trillion, the Democrats want $3.4 trillion – Sen. David Perdue (R-Ga.) said, “I mean how many trillions do we just want to blow here? I mean, you added $3 trillion to the debt.” “We’re trying to be reasonable here,” Sen. Purdue added.

“Nancy Pelosi has said that the $1 trillion HEALS Act proposed by Senate Republicans for COVID relief isn’t enough and wants $3.4 trillion for the HEROES Act. How many trillion should Congress spend?”

Pelosi’s bill is “dead on arrival” in the Republican-controlled Senate, Perdue replied. “I mean how many trillion do we want to just blow here? I mean, you added $3 trillion to the debt. We’re trying to be reasonable here.”

In May, under the leadership of House Speaker Nancy Pelosi (D-Calif.), the House passed a $3.4 Trillion HEROES Act for COVID-19 relief. The bill has not been brought up for debate and a vote in the Senate.

On Monday, Senate Republicans unveiled a COVID-19 relief package of roughly $1 trillion called the HEALS Act. Unlike the bill passed in the House, the Republican bill cuts enhanced weekly unemployment benefits from the current $600 to $200.

According to the Committee for a Responsible Federal Budget (CRFB), last year’s budget deficit totaled $984 billion. In April, the CRFB projected that the deficit would be nearly four times higher this year, exceeding $3.8 trillion. As a share of the economy, the deficit was projected to total 18.7 percent of GDP in 2020.

As of June 9, the United States gross federal deficit had surpassed $26 trillion.