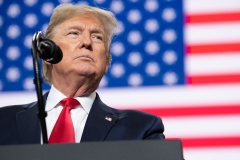 (CNS News) -- During a dinner reception on Saturday at Mar-a-Lago, Donald Trump's primary home, the Alabama Republican Party honored the former president with a resolution stating, "President Donald j. Trump was one of the greatest and most effective presidents in the 245-year history of the Republic."

The resolution was initially passed by the Executive Committee of the Alabama Republican Party on Feb. 27, 2021.

The resolution mentions several of President Trump's accomplishments in office. These include Operation Warp Speed, to deliver a safe and effective COVID vaccine "in record time"; the Tax Cuts and Jobs Act, which cuts $1.1 trillion in taxes over 10 years; withdrawing the U.S. from the "job-killing" Paris Climate Agreement; policies that "led to record low unemployment rates for all Americans including African, Hispanic and Asian-Americans prior to the pandemic"; appointing three justices to the Supreme Court; launching the U.S. Space Force; strengthening U.S. military branches around the globe; withdrawing from the Iran nuclear deal; moving the U.S. embassy to Jerusalem; and "initiating the Israel-UAE (and other surrounding nations) accord providing more stability and commerce in the Middle East."

The resolution also states, "President Trump accomplished more in 48 months than Joe Biden did in 48 years as a senator and vice-president."

The document concludes, "NOW THEREFORE, BE IT RESOLVED by the Alabama Republican Executive Committee that President Donald J. Trump is highly honored and commended, and that this resolution is offered to him in deepest appreciation for his dedication and sacrifice to our country in order to 'Make America Great Again.'"